Turkey continues to be target of blatant 'aiding ISIS' allegations 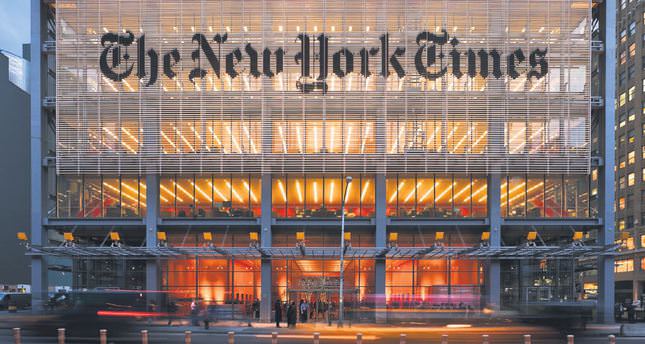 Since ISIS's capture of Mosul, Turkey started facing continuous accusations by media, claiming that the country allowed ISIS militants to cross its border, which has strongly been denied by government officials

Since the capture of the Iraqi city of Mosul by the Islamic State of Iraq and al-Sham (ISIS) and a major increase in terrorist activities of the organization, Turkey has begun facing accusations by Western media, claiming that Turkey allowed ISIS militants and weapons to cross its border, a claim that has strongly been denied by the Turkish government.

In a recent editorial titled, "A Necessary Response to ISIS" published by The New York Times (NYT), the American daily claimed that the U.S. "cannot go it alone in the fight against the Islamic State in Iraq and Syria, the extremist group known as ISIS whose ruthlessness and killing has dumbfounded and horrified the civilized world."

The editorial was published on Monday, when the media was shook with reports stating that the U.S. may cooperate with the Syrian regime - which crossed President Barack Obama's infamous "red line" by using chemical weapons that killed hundreds - to combat ISIS in the region. "ISIS has received financing from donors in Kuwait and Qatar. Saudi Arabia funneled weapons to Syrian rebels and didn't care if they went to ISIS. Turkey
allowed ISIS fighters and weapons to flow across porous borders.

All of that has to stop. Creating a regional military force may be required, including assistance from the Gulf Cooperation Council countries and Turkey. It certainly will require money, intelligence sharing, diplomatic cooperation and a determined plan to cut off financing to ISIS and the flow of ISIS fighters between states," the NYT said in its editorial.

Despite continuous accusations against Turkey, no evidences have been shown to prove that Turkey aided ISIS or the al-Qaidaaffiliated al-Nusra Front, both of which are listed as terrorist organizations in Turkey.

Furthermore, Western media turns a blind eye to the fact that Turkey has an open-door policy for war-stricken Syrians, and that most of ISIS recruits are citizens of Western countries who can easily obtain Turkish visas.

As for treating wounded Syrians, a Turkish official has recently spoken on the condition of anonymity, saying that even Syrian regime soldiers were treated in Turkey. Analysts say that it would be a great expectation for Western media to understand Turkey's "compassionate diplomacy" while it overlooks the massacre in Gaza or dissemble the ongoing tragedy in Syria.

Furthermore, CNBC'S David L. Philips recently wrote an article entitled, "Why is Turkey supporting Islamic State fighters in Iraq?" in which he accused President-elect Recep Tayyip Erdoğan's son, Bilal Erdoğan, with providing funds to an aid organization that allegedly assisted ISIS. Erdoğan's lawyer said the story has no grounds and is totally based on false claims.

Speaking to Daily Sabah on Sunday, Erdoğan's London-based legal representative Hakan Camuz said that the article is politically motivated, and all that was written about his client is entirely false. In his article, Philip claimed that Turkey's Humanitarian Relief Foundation (IHH) is supporting extremist groups in Turkey, but he did not show a source to back up his claim. He then furthered his allegation by saying that Erdoğan's son has ties with the IHH, and that one of its trucks was found with weapons heading for extremist groups in Syria, which the IHH vehemently denied. "Mr. Erdoğan has no 'ties' to IHH. He has never been involved with IHH nor sat on IHH's board. He has not been involved in fundraising for IHH, whether using his father's political contacts or otherwise,"

Camuz wrote in a pre-action protocol letter to CNBC. Philips, who previously asked the U.S. government to remove the PKK from its terrorist organization list and to suspend Turkey's NATO membership, had not shown any tangible evidence for his article. He is known for his strong opposition to the ruling government and President-elect Erdoğan.

The truck that was stopped by a prosecutor with links to the Gülen Movement - led by U.S.-based imam Fethullah Gülen - belongs to Turkey's National Intelligence Organization (MİT), and was carrying aid to war-stricken Turkmens in Syria. The controversial attempt to stop the truck was a move that violated national security laws, and was allegedly a move to cause rumors in the international arena that Turkey was sending arms to groups in Syria.

The IHH, which serves millions of needy people across the world, has continuously denied any sort of connection to extremist groups. It said that the accusations in certain media circles are targeting the aid organization in order to punish them for sending an aid ship to Gaza in 2010 in which 10 unarmed activists were killed by Israeli forces. In short, Philips accuses Turkey of serving extremist groups by pointing to an aid truck belonging to the MİT. He then says the truck belonged to the IHH's - like Gülenists had previously claimed. He later said Bilal Erdoğan is a board member of the aid group even though he is not shown in the hierarchy of the organization, then later continued to try to support his claims with those of Cengiz Çandar, a columnist who opposes Erdoğan's policies and rhetoric and is known to say "the MİT was the 'midwife' that helped with the birth of ISIS without showing evidence."
Last Update: Aug 27, 2014 1:38 am
RELATED TOPICS