Despite Palestinian gains, peace may be broken again say experts 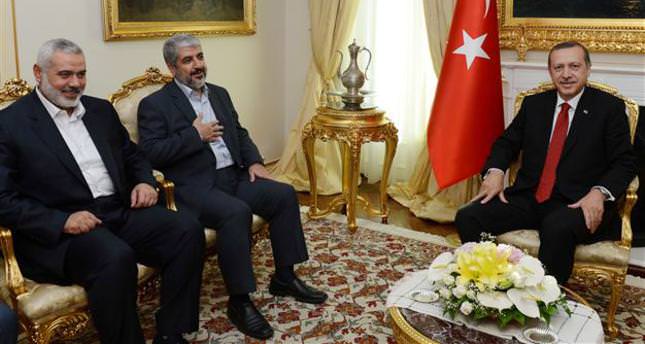 by Fatih Şemsettin Işık Aug 28, 2014 12:00 am
On Aug. 26, the Israeli government accepted a longterm two-step cease-fire agreement brokered by Egypt 51 days after the start of the Israeli offensive in Gaza. Although it seems that the heavy blockade of Gaza will be eased by Israel, the agreement may not last long according to experts Israel and Hamas agreed on Tuesday to an Egyptian-mediated plan to end the fighting in Gaza after 51 days of fighting. The cease-fire formally came into effect as of 16:00 GMT on the day the agreement was signed. On the same day, Khaled Mashal, the political leader of the Hamas movement, called President-elect Recep Tayyip Erdoğan and informed him about the ongoing cease-fire talks according to sources in the Prime Ministry's Office. On the following day, Turkey's Ministry of Foreign Affairs released a press statement about Turkey's being content with the bilateral compromise.

"A cease-fire is a significant step for halting the violence and facilitating permanent peace in the region. It is of vital importance to comply with the cease-fire agreement and to find a solution to all matters of dispute in negotiations between the two sides. We wish those two sides demonstrate the necessary political will in this respect," the statement said and emphasized that Turkey will maintain its efforts to provide a sustainable ceasefire in which the legitimate demands of Palestinians are satisfied.

While Hamas spokesman Sami Abu Zuhri said, "They declare the victory of the resistance, the victory of Gaza," on the Israeli side, Prime Minister Benjamin Netanyahu faced strong criticism from the country's newspapers over a campaign in which no clear victor emerged. Ufuk Ulutaş, who is a columnist for Akşam newspaper and writes pieces about the Middle East, stressed that the lifetime of the agreement is dependent upon Israeli public opinion of Netanyahu. "The cease-fire agreement is accepted as a disaster and a kind of retreat in Israeli public opinion unlike Hamas, who declared it a victory. I think this agreement will not live long and will last until Israel attacks again because Netanyahu is under great pressure from the opposition," he said. The agreement consists of two steps. First, Egypt accepted opening the Rafah border crossing with Gaza, and Israel agreed to allow Gaza to receive goods, including humanitarian aid and construction equipment under the control of the Palestinian Authority. "I think the agreement brings gains and losses for both sides.

Israel pledges to ease the blockade on the condition that the Palestinian Authority controls the borders. That shows the demands of both sides are satisfied to a certain extent," said Ulutaş. Can Acun, a researcher on Middle Eastern politics from the SETA Foundation, emphasized, "Each cease-fire process without Israel's blockade removed will end with the restart of conflict," he said. He also pointed out that even Egypt disregarded Hamas and other resistance groups in Gaza - diplomatic initiations from Turkey and Qatar and military success in the area provided this two-phased agreement to be accepted. "While Hamas and other resistance groups were at the table as main actors, it seems like they push most of their demands through Israel and Egypt. Raising criticism toward the government in Israeli public opinion and celebrations for victory in Gaza, are among the biggest manifestations," he said.
Last Update: Aug 28, 2014 1:27 am
RELATED TOPICS