Erdoğan sworn in as first directly elected president of Turkey 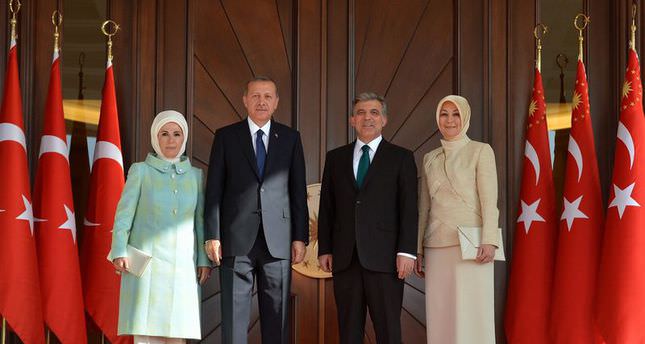 Recep Tayyip Erdoğan, who has worked his way up from a humble youth in Istanbul to become one of the most significant leaders in Turkish history, became Turkey's first ever directly-elected president

Turkish politics on Thursday witnessed a historic day with President Recep Tayyip Erdoğan, former prime minister and one of the founders of ruling Justice and Development Party (AK Party), stepping up for his oath-taking ceremony as Turkey's 12th president at the Parliament.

Addressing the Parliament from the rostrum after walking along the red carpet rolled out for him, Erdoğan read his oath saying, " I swear on my honor and integrity before the TBMM and before history, to protect the existence and independence of the State, the indivisible integrity of the country, to abide by the Constitution, the rule of law, democracy, the principles of Atatürk [founder of modern Turkish Republic] and the secular Republic, not to deviate from the ideal of ensuring human rights and fundamental freedoms to everyone under the understanding of national peace and prosperity, national solidarity and justice, and to do my utmost to preserve the glory and honor of the Turkish Republic and to fill the position that I am assigned without bias."

President Erdoğan and First Lady Emine Erdoğan were welcomed by former President Abdullah Gül and his wife at the entrance of the palace with the ceremonial cavalry regiment. Ahead of Erdoğan's arrival, foreign dignitaries, who began to arrive at the palace, were welcomed by Gül. Later, Gül and Erdoğan held a closed-door meeting. When the meeting finished, Erdoğan and Gül both gave their speeches at the handover ceremony.
Speaking at the handover ceremony, Gül stated that he and Erdoğan have a 40-year-long friendship and brotherhood. "I am confident that President Erdoğan will push Turkey even further to succeed," added Gül. Bidding farewell to the 11th president of Turkey, Abdullah Gül, Erdoğan granted a state medal of honor to Gül.

Erdoğan started his speech after Gül. Addressing Gül as the 11th president and his valuable brother, Erdoğan stressed the importance of the first-directly elected president and said, "as I continue to breathe, I promise to protect this valuable trust given by our nation via election."

"Today marks the closing of an old era and the opening of a new era in the new Turkey," added the president.

Erdoğan cemented his political career with the presidential tenure that will keep him in the nation's driving seat for at least another five years. President Erdoğan has continuously indicated that he would like to transform the presidency from a largely ceremonial post into a more powerful
position.
Last Update: Aug 28, 2014 8:09 pm
RELATED TOPICS