Erdoğan sworn in as first elect president of Turkey 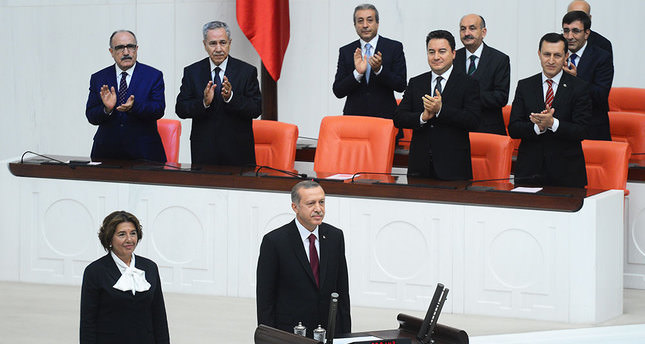 by Associated Press Aug 28, 2014 12:00 am
Recep Tayyip Erdoğan was sworn in as Turkey's first popularly elected president on Thursday, a position that will keep him in the nation's driving seat for at least another five years.

Erdoğan was scheduled to appoint Foreign Minister Ahmet Davutoğlu his designated successor as prime minster and loyal ally to form a new government in the evening, following ceremonies at the presidential palace.

Taking the oath in parliament, Erdoğan said: "As president I swear on my pride and honor that I will protect the state, its independence, the indivisible unity of the nation ... and that I will abide by the constitution, the rule of law, democracy ... and the principle of the secular republic."

Later, Erdoğan headed to the mausoleum of the nation's founder, Ataturk, where he wrote on the visitors' book: "Today, the day the first president elected by the people takes office, is the day Turkey is born from its ashes and the process of building a new Turkey gains strength."

Legislators from Turkey's main opposition party left parliament minutes before Erdoğan arrived. An opposition legislator was seen throwing a copy of the constitution toward the parliament speaker.

Erdoğan has dominated Turkish politics for a decade and won Turkey's first direct presidential elections on Aug. 10. He has indicated he wants to transform the presidency from a largely ceremonial post into a more powerful position. He intends to exercise the full powers of presidency, including powers to call parliament and summon Cabinet meetings.

On Wednesday, Erdoğan rejected claims that Davutoğlu would merely do his bidding, saying the two would work "hand in hand" in achieving goals he has set for the country.
Last Update: Aug 28, 2014 8:14 pm
RELATED TOPICS