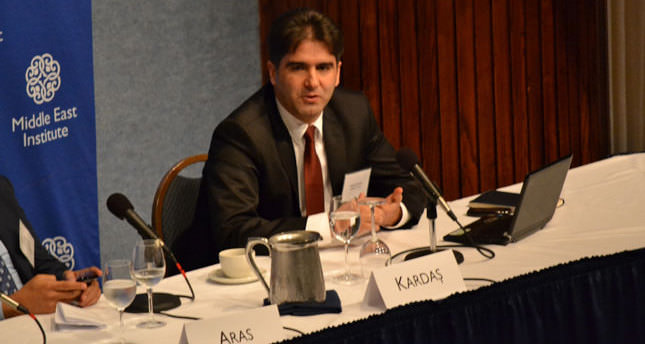 by Fatih Şemsettin Işık Aug 30, 2014 12:00 am
In a conference held in Washington, political experts and academics drew attention to accusations that Turkey supports the Islamic State of Iraq and al-Sham (ISIS) and said such claims have no grounds and that these claims are purposely spread to harm Turkey's role in the region.

Organized by the Center for Middle Eastern Strategic Studies (ORSAM) and titled Turkey, Iraq, and the Kurdistan Regional Government (KRG), in partnership with the Wilson Center on Monday last week, the future of Iraq, the advancements of ISIS and Turkey's perspectives on the Kurdistan Regional Government were addressed. About allegations that Turkey had supported ISIS in Syria to displace Bashar Assad, ORSAM President Şaban Kardaş said that such arguments are "nonsense considering the realities in the field." "There are reports indicating that at the initial phase of ISIS, they had strong ties with Syrian intelligence. Many fighters had been released from Syrian prisons before," he said and added, "ISIS has also been fighting with the Free Syrian Army (FSA) and other Syrian moderate opposition groups that Turkey and the Western world openly supports […] As a matter of fact, Turkey announced that ISIS was a terrorist organization in 2013. Hence these claims have no reality in the area."

About the issue of foreign fighters passing through the Turkish border and joining ISIS, which is still hotly debated by Western media outlets, Kardaş stressed that incidents should be examined through a chain of events instead of only the latest developments. "We should look at the radicalization process of those people in the group. If a person carrying a Russian passport could pass through a Norwegian airport with AK-47 equipment in his luggage, then that means there is a problem at the beginning. Western intelligence agencies should have been aware of this," he said, noting that 1,000 people who were going to fight in the Syrian civil war were deported by Turkey in 2013.

Another speaker, Dlawer Ala'Aldeen, the director of the Middle East Research Institute in Irbil, Iraq, also said that presenting people who infiltrated through the Turkish border as proof of Turkish support for ISIS is not logical. "Turkey has a 911-kilometer border with Syria, and anybody can do this type of infiltration from Turkey at any time. If it wasn't this way, there wouldn't be a PKK problem for Turkey either," said Ala'Aldeen, who claimed that he can easily say Turkey had not officially supported ISIS in Syria.

Since the capture of the Iraqi city of Mosul by ISIS and a major increase in terrorist activities by the organization, Turkey has begun facing accusations by media claiming that Turkey allowed ISIS militants and weapons to cross its border - a claim that has strongly been denied by the
Turkish government.
RELATED TOPICS