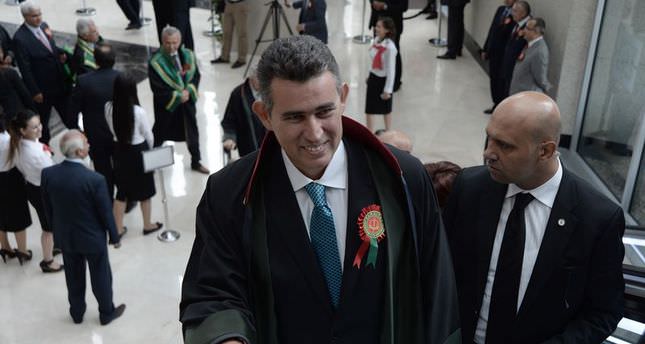 by Daily Sabah Sep 01, 2014 12:00 am
Speaking at the Judicial Year Opening Ceremony on Monday, Turkish Bar Association head Metin Feyzioğlu stressed the impartiality of the judiciary and said, "As justice is the core of the country, treating judicial authorities, lawyers, prosecutors and judges as an enemy means to undermine the judiciary."

Feyzioğlu, who occupied the Turkish political agenda with his politically motivated speech at the 146th anniversary of the Council of State, said that any danger against the judiciary, justice and the core values of the country is arbitrary.

In the ceremony that President Erdoğan, Prime Minister Ahmet Davutoğlu and Justice Minister Bekir Bozdağ did not attend, Feyzioğlu said that investments in the country, employment opportunities and a secured future are directly linked with securing the superiority of law. Touching on the ongoing violence in the Middle East, Feyzioğlu said that only if Turkey ensures human rights in its lands will it be able to call on the international community and other countries to take action to stop the ongoing violence.

Last week, it was announced that Erdoğan would not attend the ceremony of the judicial year after Turkey's Supreme Court of Appeals board voted Monday in favor of Feyzioğlu, who is at odds with Erdoğan, to hold a speech at the ceremony on Sept. 1. After he was elected as president, Erdoğan earlier said he would not attend if Feyzioğlu addressed the gathering.

Over the weekend, sources from the prime ministry said that Davutoğlu would not attend the Judicial Year Opening Ceremony due to the newly formed cabinet meeting on Monday.

At the 146th anniversary of the Council of State held in May, Feyzioğlu gave a nearly one-hour speech criticizing the government on numerous issues, including the Twitter ban, the most recent Labor Day protests and the Dec. 17 operation allegedly orchestrated by the Gülen Movement in order to overthrow the government.

Feyzioğlu said during his speech that there will be no justice in the courts when politics is involved and way beyond the allotted time of 25 minutes for his speech. He said, "The recent administrative and judicial bans on social media that echoed the repressive mindset of previous times is against the Constitution, European Convention of Human Rights and legislation on online publishing."

Following Feyzioğlu's speech, Erdoğan stormed out of the ceremony by saying "The head [of the Council of State] spoke for 25 minutes - you have been speaking for more than an hour. You are misbehaving and your statements are false."

Questioning whether Feyzioğlu has a political agenda, the speech was criticized by certain opposition parties, including the Nationalist Movement Party (MHP), nongovernmental organizations and other foundations.

Until recently, Feyzioğlu has been among the possible Republican People's party (CHP) chair candidates ahead of the extraordinary party congress on Sept. 5-6, yet he dismissed the rumors.