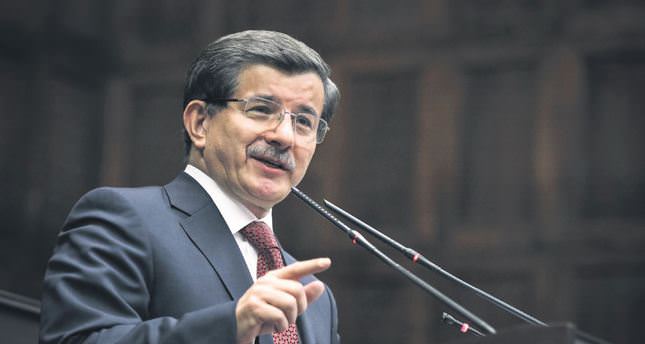 Prime Minister Davutoğlu said the key tenets of the new government are the reconciliation process, value-based foreign policy, economy and the EU

Prime Minister Ahmet Davutoğlu yesterday presented the program of Turkey's 62nd government to the Parliament. Advanced democracy, humanitarian development, public welfare, a strong economy and value-based foreign policy were announced as the main pillars of the program, while he stressed the continuation of the Kurdish reconciliation process, boosting the EU accession talks and maintaining social and economic reforms as the new government's priority areas.

The program specially focuses on the EU membership bid in a systematic manner. It was indicated that the "National Course of Action for Joining the EU" will be put into practice including a timeline of 2014-2017 for accelerating the EU process and reforms in all fields.

Despite all the challenges of the process, being a full-member of the EU by 2023 was emphasized as an objective in the Program, specifically because that year is the 100th anniversary of the Republic's founding.

In the Program, it is underscored that the Reconciliation Process will be carried out pertinaciously. The Reconciliation Process, which became a government policy with the framework law enacted a few months ago, will be sustained in a more powerful manner under the coordination of all institutions, enabling new methods for solutions being provided urgently and as the most crucial thing, maintaining works for making people from all strata support this process.

It is also indicated that as the 62nd Government, objectives of a new roadmap in the Reconciliation Process will be set as: finishing the terror, disarmament, bringing people into social life and paving the way for participation to democratic politics. Drafting a new constitution was also emphasized as one of the priorities of the new government in the Program. According to the Program, the new constitution will be based on two main pillars that are: rights and freedom and social expectations. The Program also stated that in "New Turkey's" New Constitution, social legitimacy will be at the heart of rights and freedoms, democracy, the rule of law and the freedom of thought and belief.

The Program also underlined that meeting the expectations of faith and culture-based demands of the Alevi citizens, and stated that that the government will continue to coordinate this process by working with opinion leaders and representatives of Alevi citizens. Among the AK Party's political journeys' core principals, political accountability, transparency and fighting against corruption also appeared as some of the topics in the Program. Accountability and transparency's importance is emphasized in the government Program for preserving and sustaining the Turkish Economic acquisitions over the last 12 years. It was also pointed out in the Program that Turkish development and advancement in offering welfare and prosperity to society can only be possible with the former AK Party governments' determination about transparency and anti-corruption policies.

It also underscored in the Program that Turkey rose from 77th in 2003 to the 50th position among 133 countries in Transparency International's Corruption Perception Index (CPI) of 2013. In this regard, the same effort related to transparency and anti-corruption policies will continue to be conducted by the 62nd government, with resilience and without any interruption.

The Program also emphasized the continuation of a struggle against all the factors that threaten national security, and stressed that there will be no compromise on this matter. Referring to the Gülen Movement - which is believed to have infiltrated key governmental bodies with an aim to overthrow the Turkish government during the Dec. 17 and Dec. 25 corruption operations - the Program stressed that fighting against the tutelage that emerged in the two years that threatens national security will continue as well as against the other tutelages in the past.

Describing the Gülen Movement as the new tutelage that aims to influence the judiciary, the security bureaucracy and civil society, the Program stressed that it will continue to fight against this gang within the law, and expressed that they will not allow any gangs, period. Regarding foreign policy, while pointing out the Program's aim is for Turkey to come to the fore in order to contribute to all regional and global issues in congruence with new, emerging circumstances, it also emphasized that as a committed actor to adjunct countries and a leading actor in the global sphere, the reinforcement of Turkey's position is purposed as well.

The Program states, "An open, peaceful and diplomacy-oriented foreign policy is predicted in context of the vision of new Turkey," and added, "New Turkey would further increase its integration with the world." Regarding economic policies, the 62nd government underlined that they will continue to maintain their economic policies with improvements, as confidence and stability have always been a priority in the AK Party government. It also pointed out that they will work to increase the share of products that are based on research and development, innovation and that have brand value, with exports by giving state support and work towards increasing the use of Turkish Lira in foreign trade. It is indicated in the Program that preparation for a new industrial strategy document, which will cover the years between 2015-2018, has already been started.

The Program is also aimed at making Turkey Eurasia's center of production in 2023. In this regard, it underscored that the government will continue its support to increase the number of small-and medium- sized enterprises (SME), and they will also support initiatives for opening up stock markets for SME. The Parliament will convene on Thursday to discuss the 62nd Government Program. After the discussions conclude, the government will seek a vote of confidence on Sept. 6.
Last Update: Sep 02, 2014 10:02 am
RELATED TOPICS