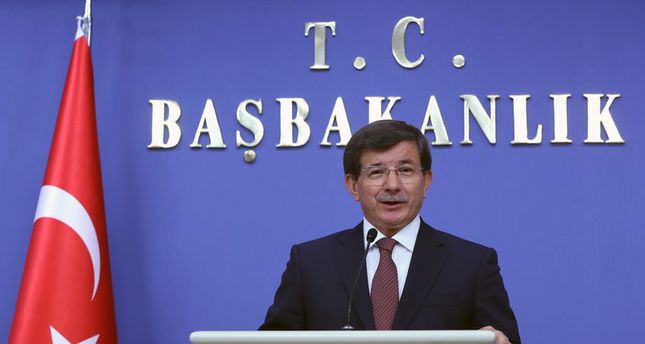 by Daily Sabah Sep 01, 2014 12:00 am
New Turkish Prime Minister Ahmet Davutoğlu and his cabinet will present the 62nd government's program to Parliament, which will meet today at 14:00. The 62nd government's program is expected to cover certain topics such as maintaining macroeconomic stability, sustaining the development of Turkey, making a new constitution, fighting the "parallel structure" and new steps in the reconciliation process that started between Ankara and the Kurds with AK Party initiatives.

Reportedly, the new government and its program will be the continuation of 61st government policies. Economic policies to regulate changes and continuities in domestic and foreign areas are planned. The new governments' approach to development will be based on production and employment, programs that put special emphasis on education and R&D to meet development targets.

It is expected that the 62nd government program will allocate wide coverage to the new constitution. In this regard, the government's program aims to resolve identity and belonging issues and intends to enable every party in Turkey to participate in politics without being exposed to any discrimination.

Furthermore, related to the reconciliation process, the 62nd government's program displays the determination of the Davutoğlu government toward the reconciliation process by emphasizing human development in the southeastern region of Turkey, protection of ethnic and cultural values in the new constitution and resilience in conducting peace talks with the Kurdish side. In addition, the issue of the Gülen Movement, which is believed to have infiltrated the police and judiciary to overthrow the government, is expected to be referred to directly in the program; fighting the movement is expected to be included in the program under the topic of national security.

Over the weekend, Davutoğlu announced the goals and vision of Turkey's 62nd government on his Twitter account. "Our main goal is to build a better future, for not only our country but the region as a whole," said Davutoğlu, pledging to continue to work in line with the vision of a new Turkey established by President Recep Tayyip Erdoğan. It is announced that Davutoğlu will not attend the Judicial Year Opening ceremony due to the ministerial council meeting to be held on Monday.

According to the prime ministry sources, Davutoğlu said that AK Party government had always shown great respect to judicial independence and taken huge steps towards improvement of the judicial facilities and implementation of important reforms for democratization, including removal of the tutelage over the judiciary. Davutoğlu said, "the protection of the judiciary's independence against tutelage is crucial, particularly against the 'parallel structure'." The prime minister added that he would continue to provide all kinds of support to ensure the independence of judiciary in the upcoming period.
Last Update: Sep 01, 2014 1:14 am
RELATED TOPICS