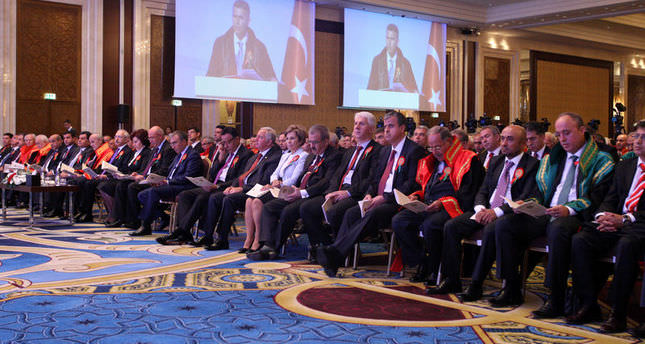 by AA Sep 01, 2014 12:00 am
Attempts to pressure Turkey's judicial institutions is of concern, Turkey's Supreme Court President Ali Alkan said at the 2014-2015 judicial year ceremony at the JW Marriott Hotel in Ankara on Monday.

Alkan said: ''Exhausting the judiciary will not benefit anyone. A strong justice is security for everyone, not just judges. This point should never be forgotten. Members of the judiciary should not be forced into polemics.''

"It is unfair that judges become politicized due to their own political views," Alkin said.

Meanwhile, President Recep Tayyip Erdogan, who is on an official visit to the Turkish Republic of Northern Cyprus, said in his message from the official presidency website marking the judicial year ceremony, "All judicial institutions and their members should be extremely sensitive, attentive and brave against the political, ideological and community-based groups trying to influence and control the judiciary,"

"Impartiality of the judiciary, judicial institutions and members are equal and even more important than judicial independence. It is very clear that justice will never be realized if political, ideological and community-based interests dominates the judiciary," he added.