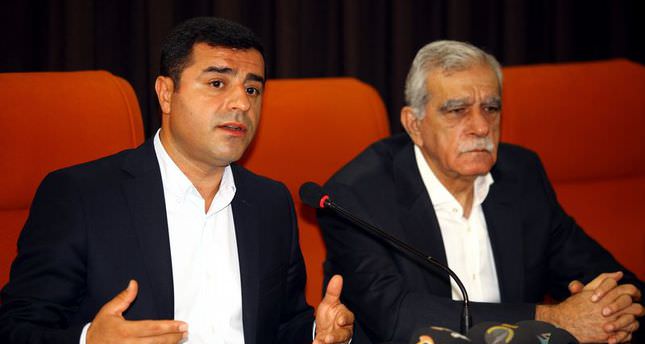 by Daily Sabah Sep 02, 2014 12:00 am
Co-president of the Peoples' Democratic Party (HDP) Selahattin Demirtaş, heavily criticized Republican People's Party (CHP) Chairman Kemal Kılıçdaroğlu for saying that he would meet with President Recep Tayyip Erdoğan "only under war conditions" and that he would meet with the president merely as a prelude to warfare. While hashing out with journalists in the Turkish Grand National Assembly (TBMM) last Monday, Demirtaş responded to questions about his being disapproved for applauding President Erdoğan at his inauguration by Kılıçdaroğlu.

He said, "There were two candidates from the [Aug.10] presidential election in the assembly - one of them won and the other one was me. My competitor was being sworn in at the podium.

Even if nobody would applaud him I would do it." "The people who voted for him are not stupid, idiots or thieves, but the public, and the public's will deserves a standing ovation. If I hadn't done it, that would have been against my personality and understanding of politics,"Demirtaş said, adding that the CHP must mind its own business instead of dealing with him.

He also said that he can meet with President Erdoğan "for the solution of problems that left 50,000 people dead," he remarked. Meanwhile, in his first group meeting on last Monday, Prime Minister Ahmet Davutoğlu appreciated Demirtaş's attitude during Erdoğan's inauguration ceremony. "Whatever they [CHP] do, we will protect the ethic of the Parliament and the book. I want to thank the Nationalist Movement Party [MHP] and Peoples' Democratic Party [HDP]," he said.

The 62nd Government's program for the Kurdish reconciliation process was presented in Parliament last Monday and underscored that process, which became a government policy with the framework law enacted a few months ago, will be sustained in a more powerful manner with the coordination of all institutions, enabling new methods for solutions to be provided quicker and as the most crucial thing, maintain work for making people from all sections of society support this process. As the HDP candidate, Demirtaş had run against Erdoğan and Ekmeleddin İhsanoğlu in the election for Turkey's first directly- elected president where he received 9.8 percent of the vote.