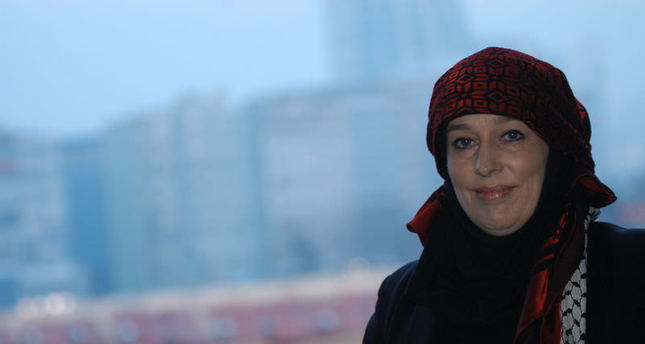 In an exclusive interview with Daily Sabah, Yvonne Ridley, a British journalist and activist, evaluated the latest developments in the region including the Islamic State of Iraq and al-Sham's attacks in Iraq and the Israeli offensive on Gaza

Yvonne Ridley is a British journalist who has written for The Sunday Times, The Independent, The Observer and The Mirror. She has also worked as a broadcaster, producer and presenter on TV programs for the BBC and CNN. The Sunday Express sent her to Afghanistan after 9/11, but since her entrance visa was repeatedly refused, she tried to cross the Afghanistan border on a donkey while wearing a Burka. However, she fell off, and was noticed by a Taliban soldier. Being accused of being an American spy, she was captured by the Taliban. Freed after 10 days captivity, she returned back home to England. During her captivity, she was asked to convert to Islam by the captors, but she refused. Nevertheless, she promised to read the Holy Quran after her release; she kept her promise, and converted to Islam in 2003. As a feminist activist, while trying to discover why the Taliban treated women the way they did, she was highly impressed by what she read. She described the Quran as a "Magna Carta" for women. Apart from her journalism, she is an activist and one of the co-founders of Viva Palestina. She has joined the Free Gaza Movement to challenge the Israeli siege.

Today, Ridley is mostly focused on Scottish politics, and is one of the major figures of the 'YES campaign' supporting the independence of Scotland that will be taken to the vote on Sept. 18.

Daily Sabah: You have contributed to major British newspapers. Your successful reporting was well known, and after 9/11 when you went to the Mideast, you were captured by the Taliban. Following your release that you converted to Islam. Did you face any discrimination or alienation from the media?

Yvonne Ridley: The BBC started referring to me as "former journalist Yvonne Ridley" until I corrected them while others tried to marginalize and sideline me. At one time, I would have been invited on to shows as an analyst or for background information on affairs in the Middle East, Arab and Muslim world, but invites dropped off. I felt as though I was being airbrushed from the media, and then discovered that some individuals and organizations were actively discouraging media and news organizations from using me as a guest analyst, observer or commentator.

DS: As a journalist, what do you think about the Western media's coverage of the Israeli assault on Gaza and the overthrow of Mohammed Morsi in Egypt?

YR: The poor coverage is largely down to access, and large news organizations like to use their own people to cover these sort of events. I thought the Western coverage of Gaza this time around was a vast improvement on previous accounts, and I am quite sure that if Israel launches another war in Gaza, it will ensure there are no Western journalists allowed in. Coverage was still woefully inadequate, and the BBC ended up pleasing no one with its lackluster coverage that portrayed a poorly, ill-equipped Hamas as the aggressor as it defended itself against the fourth largest army in the world. During one rolling news program, I listened with incredulity as a BBC journalist attempted to portray heavily-armed Israeli soldiers in tanks as the victims of reckless stone-throwing Palestinian youth.

DS: Recently you are mostly focused on Scottish politics. On Sept. 18, 2014, millions of Scots will vote on whether they want independence or remain as a part of the United Kingdom. And you are supporting the 'YES campaign' for an independent Scotland. Why do you think the people of Scotland should say YES?

YR: I will be voting YES, and I think the main reason that we will win is that Scottish voters want to cut themselves off from London's rule in order to determine their own future. Scotland has a strong economy, and people are beginning to realize that they have been subsidizing the rest of the U.K. for decades through Scottish oil and gas. In addition, the Scottish Government is committed to getting rid of the nuclear weapons based in Scotland. What's not to like?

DS: Alistair Darling, the member of the parliament and the leader of the 'NO campaign' claims that an independent Scotland has to leave the pound and will lose EU membership.However, last month, Foreign Secretary Philip Hammond warned that Britain will leave the EU unless Brussels gives them major concessions. Do you think these are valid and sufficient reasons to vote NO?

YR: Alistair Darling heads what is also known as Project Fear, and is trying to scare the voters over the prospect of losing the pound. He finally admitted on TV during the last debate that Scotland could continue using the pound. The irony is that there will be another referendum that could see the UK - with the exception of an independent Scotland - leave the European Union. We will only know after the vote how well Project Fear has worked.

DS: You are one of the founding members of Viva Palestina and you were on board the first boat to break the siege of Gaza with the Free Gaza Movement. You were not on board the Mavi Marmara, but you attended the trial of the Mavi Marmara case. A Turkish court has ordered the arrest of four Israeli commanders who were allegedly involved in the raid. How do you feel today?

YR: I missed the boat when the Mavi Marmara sailed. I was in Tripoli in Lebanon for a conference that over ran by a day. To my biggest regret, I wasn't able to join those on board the Mavi Marmara; however, I was delighted with the outcome of the exhaustive court hearing that concluded with the ordering the arrest of four Israeli commanders thought to be involved in the murderous raid in which so many Turkish activists died. The world has suddenly become a much smaller place for those suspected of committing war crimes, and I salute the decision of the Turkish courts for reaching this historic, landmark decision.

DS: To conclude this interview, what would you like to say about Turkey and Turkish foreign policies in the Middle East as an experienced journalist who covered issues relating to the region?

YR: I believe Turkey is now a serious regional power with great spheres of influence in areas where the West is no longer trusted.I'm skeptical as to why some want to pursue EU membership as I think Turkey will be stronger maintaining its current course as an emerging democratic power independent from a European Union, which is beleaguered with all sorts of problems because of its attempts to become a super state organization.

ISIS is destroying any chance of democracy in Iraq and Syria

DS: So, as you conducted many analyses and studies about the Middle East, I want to ask about ISIS. What do you think about ISIS? It is claimed that so many people are joining ISIS from Europe, especially from England and France. What would you like to say about this?

YR: I don't know who ISIS is, how it was formed or who bankrolled it although fingers point at Saudi, UAE, Qatar and Kuwait. I genuinely do not know if that is true, but as ISIS goes about its work, it is destroying any chance of democracy in Iraq and Syria, which will make tyrants and despots feel more secure today than yesterday. I would also like to know how a 200-strong ISIS convoy of vehicles was able to enter Iraq without a single air strike from al-Assad's air force who bombs anything that looks remotely like a convoy. As a result, other rebel forces move around in convoys of less than three vehicles to try and avoid aerial detection. Furthermore, why have al-Assad and ISIS never clashed on front line engagements? In addition, why did al-Maliki's army fold and crumble so quickly when ISIS appeared on the horizon?Not only did these trained soldiers flee, they left behind a massive arsenal of weapons and guns for ISIS to collect. ISIS has a slick marketing operation run on social networks geared to attracting young, disaffected men across Europe and North America; its films and videos are highly polished, edited and professional pieces of work. Also, there is no shortage of money to pay to hard up, disaffected, out-of-work Arab men. But what has really caught my eye is the movements' military and strategic ability to fight its way through Iraq gaining more ground in a matter of weeks than the U.S. and its allies ever did in 10 years of occupation. In a world where it is increasingly difficult to distinguish between the heroes and the villains, a huge question mark looms over ISIS. The movement is not Islamic; the way it has executed, crucified, tortured and beheaded those it captures is not Islamic and bears no relation to any rules of jihad drawn up by Muslim scholars over the centuries. So, who are the big winners? Syria's Bashar al-Assad is, and therefore by association, so is Iran and Iranian-controlled Iraq, the Kurds in the north and Israel.