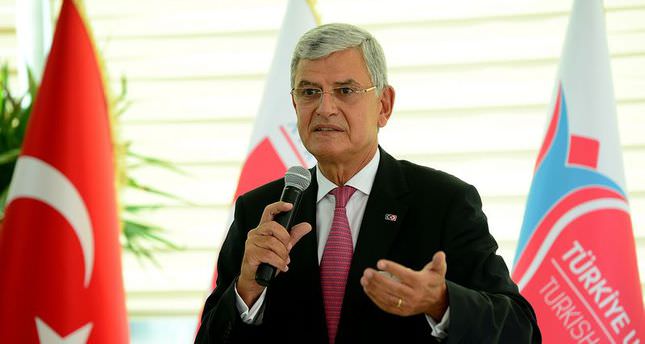 by Daily Sabah Sep 03, 2014 12:00 am
Commenting on the claims that millions of Turkish citizens would migrate to European countries if the country joined the 28-bloc European Union, Turkey's newly appointed EU Minister and chief negotiator Volkan Bozkır stated that even if the EU opened its doors to Turkish citizens, Turkey would close its gates to prevent its citizens from migrating to unemployment ridden EU countries. "If they open their doors, we would close ours. If one goes to Belgium, what is he going to do there?

There are no jobs or anything there," Bozkır said during a televised interview in response to a question on rumors that some 20 million Turks would be settling in western EU countries. Criticizing the EU's Progress Report on Turkey, Bozkur said, "The report was awful. I asked the person who completed the report if he had ever visited Turkey, and he replied 'No.' The report did not benefit anyone." Bozkır served as the EU Secretary General and Permanent Representative to the EU in Brussels. His name was announced for the EU Ministry for Prime Minister Ahmet Davutoğlu's cabinet. Speaking to Daily Sabah in May, Bozkır said, "When considering Turkey-EU relations, it is possible to observe a change in the EU's attitude toward Turkey. The EU's inability to digest its expansion over the past 10 years is a key reason for this shift. The EU, until recently, was always a center that attracted others with its political vision.

The EU offered economic welfare, and members enjoyed economic benefits, all of which are highly desirable for all countries. In today's EU, however, we see that new member countries are not able to supply funds as they are lacking in economic power and are not able to resolve their own internal problems. The EU's own slow decision-making process prevents it from being able to act swiftly and decisively in times of crisis."