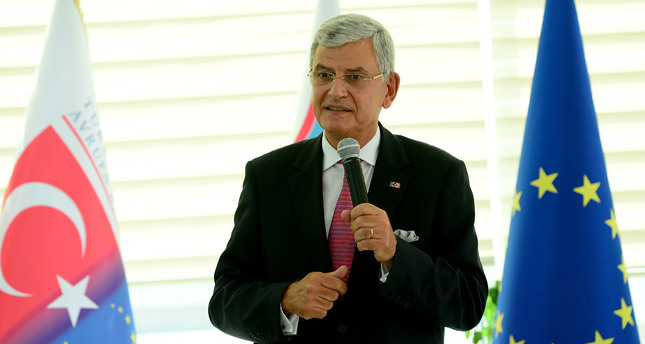 by Daily Sabah Sep 03, 2014 12:00 am
Turkey's new EU Minister Volkan Bozkır, who is also Turkey's chief negotiator at the EU accession talks has conveyed remarkable messages pertaining to Turkey-EU relations and stated that many of the issues between Turkey and EU are caused by the fact that the latter mistakenly perceives Turkey as if it is the same country when the Ankara Agreement was signed in 1963.

"When we look at New Turkey, we see that the GDP has reached $11,500 while its trade volume has reached $300 billion." said Bozkır, who went on to note that Turkey receives $50 billion income from tourism alone and there are over 180 universities with over 25 million people in the education sector. Bozkır touched upon the fact that some EU countries are not aware of these figures and do not see the fact that Turkey is constantly developing and aims to surpass EU standards in terms of education, food safety, environment, health, economy and social policies.

"Turkey has covered a lot of ground in the past ten years" said Bozkır, expressing that none of steps taken during the negotiation process were easy and he has personally witnessed this. "We do not have a long period of time" said Bozkır, noting that Turkey has left behind a period of pause and weakness and will not return to those days.

Expressing that serious progress has been made to resolve the issues of Turkey's religious and ethnic minorities, Bozkır has noted that more initiatives are being taken by the government while he criticized the Greek government for failing to restore two mosques in the city of Athens and stated it was simply unacceptable as Turkey was spending great efforts to restore numerous structures belonging to Turkey's Orthodox and other minorities.

Ankara Agreement, also known as the Agreement Creating an Association between the Republic of Turkey and the European Economic Community was signed in 1963. It is an agreement that aimed the accession of Turkey into the EEC and later paved the way for accession talks in the EU.

Appointed as the EU minister and chief negotiator, AK Party's Istanbul Deputy Volkan Bozkır, who was the former head of the Foreign Affairs Commission in Parliament, is a well-known, experienced diplomat who has held many posts in New York, Brussels, Bucharest and Baghdad. As the EU minister, Bozkır has expressed that Turkey's goal is to obtain full membership in the EU and that Turkey will not abandon its EU accession bid at any cost.