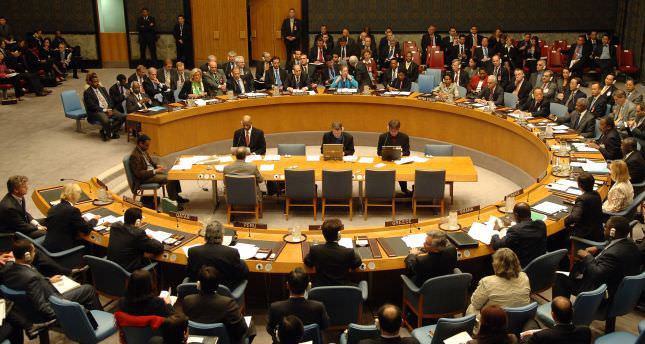 by Daily Sabah Sep 03, 2014 12:00 am
Ankara is getting ready for the election of the non-permanent member of the U.N. Security Council (UNSC) as announced in a statement by the Turkish Foreign Ministry in order to "provide significant added value to global peace and security in an era of critical and rapid change in international affairs."

Turkey accelerated its work on candidacy for the election of the non-permanent member seat of UNSC to be held next month. In order to be elected for the post for a second time (Turkey held the seat between 2009 and 2010 first time) an intense diplomatic effort will be conducted by either the president or the government. Turkey wants to be elected to the seat by again receiving a record number of votes, which totaled 151 in the 2009 elections. In order to achieve this, Foreign Minister Mevlüt Çavuşoğlu and EU Minister and Chief Negotiator Volkan Bozkır are expected to conduct a vigorous lobbying effort. In a statement by Çavuşoğlu, he emphasized that Turkey "initiates and implements mutually beneficial projects across a wide area from the Caribbean to the Pacific islands without limiting these endeavors to its immediate neighborhood […] Our policy of 'zero problems with neighbors' and our efforts to encourage international cooperation and dialogue are also among the primary elements of our vision for creating a harmonious and prosperous climate that will render lasting peace and security." The elections in which New Zealand and Spain are also candidates for the seat, will be held in next month's U.N. General Assembly. If Turkey is chosen for a second time, it will be Prime Minister Ahmet Davutoğlu's first diplomatic victory in his new post. The UNSC has 15 members, including five permanent ones. The U.S., U.K., France, China and Russia have veto power and five non-permanent members are elected for two-year terms on the council annually.In order to win the election, candidates must gain at least 129 votes of countries in the U.N. General Assembly.