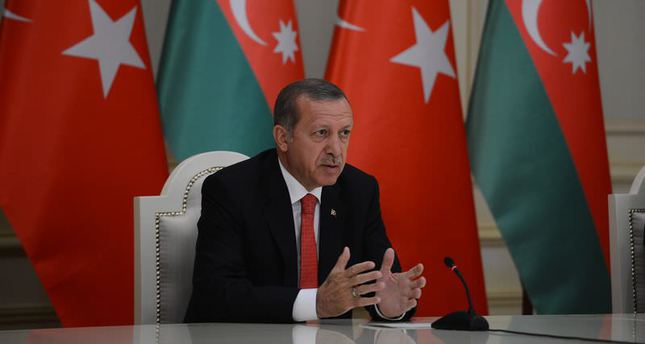 by Daily Sabah Sep 03, 2014 12:00 am
The two-day 2014 NATO summit taking place in Newport/Cardiff, Wales, commenced today with international leaders expected to evaluate recent developments and provide strategic direction for the 28-member alliance at the gathering. While developments in Ukraine, Iraq and Syria are expected to dominate the talks, it is anticipated that the alliance will have its most crucial meeting since the end of the Cold War.

At the summit, President Recep Tayyip Erdoğan will represent Turkey and, on the sidelines of the summit, Erdoğan is expected to meet with leaders including U.S. President Barack Obama, U.K. Prime Minister David Cameron, Greek Prime Minister Antonis Samaras and NATO Secretary-General Anders Fogh Rasmussen. President Erdoğan is also expected to meet with Prince Charles during his the first NATO summit as president.

During his meeting with Obama, the two leaders are expected to evaluate the latest developments in Ukraine, Syria, Iraq and the Palestinian issue. White House sources have recently stated that President Barack Obama is expected to piece together an international coalition to address the ISIS threat. British Prime Minister David Cameron also announced last week that the U.K. has raised its terror threat level to "severe" in response to ISIS advances and fear of attacks by returning ISIS fighters.

It is anticipated that Turkey's contribution to addressing the ISIS threat will be one of the major issues during Erdoğan's bilateral meetings with President Obama and Prime Minister Cameron. The German, U.S. and U.K.'s intelligence agencies allegation of surveillance on Turkey to gather information on classified issues will also be discussed by President Erdoğan. "The NATO summit and the U.N.

General Assembly will be held in the upcoming weeks. We will talk [about] these issue as leaders." Erdoğan recently said.President Erdoğan will also meet with Greek Prime Minister Samaras and both leaders are expected to evaluate the current state of Cyprus peace talks.

During his visit to Turkish Northern Cyprus, Erdoğan suggested a twostate solution on the divided island. "It is not possible for us to reach any agreement that is not based on a two-state solution, Greece and the Greek Cypriots should demonstrate the same goodwill," Erdoğan said.

The Nagorno-Karabakh issue, which is the subject of an intense, longstanding political dispute between Azerbaijan and Armenia, will also be on the agenda for Erdoğan during his meeting in the NATO submit. President Erdoğan is also expected to meet with the President of the European Council, Herman Von Rompuy, and it is anticipated that the Turkey-EU negotiation and EU Commission's Progress Report are also to be discussed. NATO sources stated that the summit has five main priorities including: the Crisis in Ukraine and NATO's relationship with Russia, the instability in Syria and Iraq as well as Afghanistan's future, tackling new threats including the threat posed by extremists, regional conflicts or cyber attacks, strengthening support for NATO armed forces and strengthening partnerships.