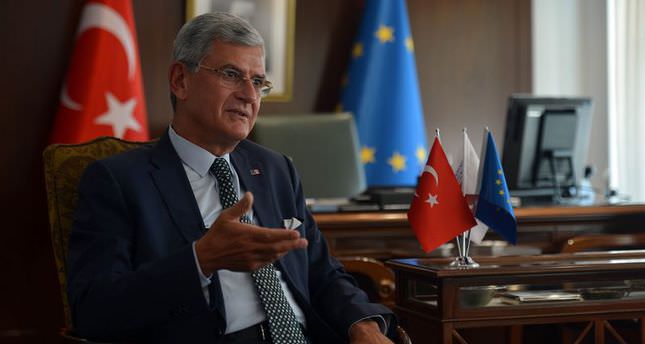 by Daily Sabah Sep 04, 2014 12:00 am
Turkey could become part of the EU in just a couple of years, should EU will so, said Turkish EU Affairs Minister Volkan Bozkır to the Turkish news channel, A Haber.

If the EU does not wish to grant accession to Turkey, then it could prolong negotiation the process just by bringing various topics to the table, according to Bozkır.

"Turkey should no longer be kept waiting or denied membership," Bozkır said. "We need to therefore find a midpoint where interests of both sides meet."

In response to questions regarding the recent news that Germany has been allegedly wiretapping its NATO ally Turkey since 1976, Bozkır told A Haber that all countries feel compelled to gather intelligence for their own security, economic and political interests, and to find a balance in the region.

"The job of embassies is to evaluate this intelligence. Maybe we also conducted similar data gatherings, and we should. If Germany has gathered security intelligence, we should also do the same."

Appointed as the EU minister and chief negotiator, AK Party's Istanbul Deputy Volkan Bozkır, who was the former head of the Foreign Affairs Commission in Parliament, is a well-known, experienced diplomat who has held many posts in New York, Brussels, Bucharest, and Baghdad.