Kılıçdaroglu re-elected as CHP chairman in a close election 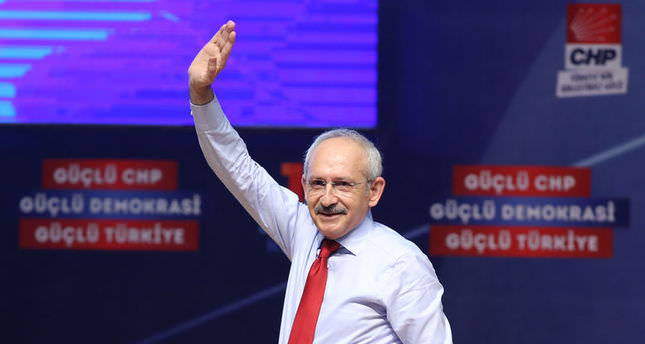 As the 18th extraordinary CHP congress began on Friday with speeches from party chair rivals, CHP delegates said 'yes' to Kılıçdaroğlu's leadership for a third term with 740 votes

Republican People's Party (CHP) leader Kemal Kılıçdaroglu and his rival Muharrem Ince, who resigned from his deputy chairmanship post, ran for the party leadership at the extraordinary congress on Friday.

At the 18th extraordinary congress, which was run on the theme of "unity and brotherhood, Kılıçdaroglu secured his party leadership post in a closely contested election, with 740 delegates voting for him while Ince received 415 votes, according to unofficial figures.

In a more peaceful atmosphere compared to previous CHP extraordinary congresses, which have previously witnessed rows both between delegates and candidates, the rivals shook hands and took to the stage to address guests. In his speech, Kılıçdaroğlu, who has headed the party since 2010, criticized certain intra-party opponents. Addressing CHP members who have turned Turkish politics into a conversation piece of their "rakı table,"Kılıçdaroğlu said that he will purge those members because "what the CHP needs is individuals eager to work, not those who trifle."

Responding to criticism that he had turned into a tyrannical leader, Kılıçdaroğlu said that he will no longer let opponents take to the stage and criticize the CHP, and he will purge certain members for the sake of the party. "We support democracy, but democracy does not mean chaos. Either you follow this party's rules or you leave," Kılıçdaroğlu urged the party members. Continuing his speech, the CHP leader stated that there are party members who behaved as if they were the landlords of the party and pledged to purge them.

Kılıçdaroğlu denied that he has begun to lean towards the right wing and alienate the party's leftist principles. "Respecting any identity or belief does not mean shifting to the right,"Kılıçdaroğlu told delegates. Also, Kılıçdaroğlu listed three criteria that are necessary for the parties success: strong leadership, organizational unity and people working in harmony to come to power. "I will not let the members talk at cross purposes. Democracy means to raise a common voice. This is not a congress arranged to purge, we are on the side of unity."

Kılıçdaroğlu added that he "loves everyone" without making any discrimination between right and left. Expressing the importance of democracy and freedom, Kılıçdaroğlu said that he defends the rights and interests of the public. Taking the stage before Kılıçdaroğlu, İnce accused the party administration and Kılıçdaroğlu of alienating the leftist principles the party was established on. Highlighting that he appreciates attempts to approach "rightest" citizens and to go into action to receive their votes, İnce harshly denounced moves undermining the party's core leftist principles. Referring to the successive failures of the CHP in previous elections, İnce stressed that the moves toward the right wing are not helping the party in its bid to be a successful leftist party. İnce ambitiously pledged that he will lead the CHP to power, should he get elected as the new CHP leader. When his speech was interrupted by "Hope of the nation, Kemal" slogans, İnce said that "if Kılıçdaroğlu is the hope of the nation, believe me, I will be happy too. But, the streets [CHP voters] do not say so anymore." Criticizing Kılıçdaroğlu's decision to field a joint presidential candidate with the right-wing Nationalist Movement Party (MHP), İnce noted, "When I first heard the name of [Ekmeleddin] İhsanoğlu - the CHP and MHP joint candidate, who lost in the presidential election - I saw a 100 percent failure against [President Recep Tayyip] Erdoğan - the current president who was elected with 52 percent of the votes." Adding that he does not have any individual problem with Kılıçdaroğlu, İnce criticized his policy of joint candidature, saying "Kılıçdaroğlu presented Erdoğan with the presidency." "My goal is not a CHP that's agenda is scattered by the AK Party, but a CHP that is able to create its own agenda," noted İnce.

Speaking to Daily Sabah after Kılıçdaroğlu's congress victory, CHP Bursa Deputy Aykan Erdemir said that CHP delegates showed their support in the reform period within the CHP. "The congress gave a reform message. The message of more young members, more women and new faces." CHP Antalya Deputy Gürkut Acer spoke to Daily Sabah and stated that the decision of the CHP delegates is highly significant for the party's stability. "Our delegates decided to continue with the same leader, the stability within the party will keep going. The Party Assembly (PM) election on Saturday is to form the common sense of the party. I also believe that our delegates will give sensitive decisions on this issue and a unifying mindset will be ensured within the CHP." Acer further noted that new strategic moves will be developed as of the first Monday after the congress.