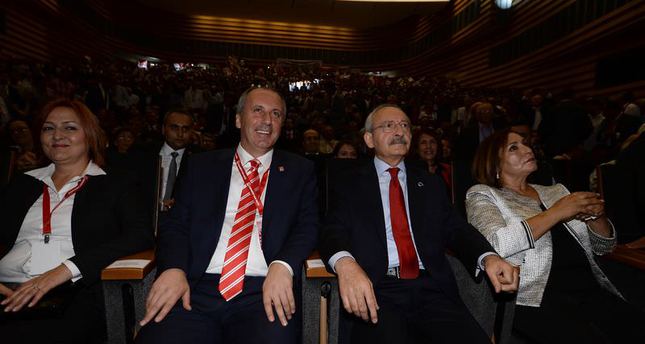 by Daily Sabah Sep 07, 2014 12:00 am
As the 18th extraordinary congress of the main opposition secularist Republican People's Party (CHP) ends with Kemal Kılıçdaroğlu's election for a third term, the list of names who will be included in the Party Assembly (PM) and the party's high discipline council became clear on Saturday, the second day of the congress.

Amid criticism that CHP leader Kılıçdaroğlu was leaning towards the right wing, a former member of the Islamic- rooted Felicity Party (SP), Mehmet Bekaroğlu, who has been harshly criticized by intra-party opponents, was nominated to Kılıçdaroğlu's PM list.

Dismissing the criticisms against him, Bekaroğlu stated after he was included in Kılıçdaroğlu's PM list that he is not a rightest politician but that he sides with labor. Former Editor-in-Chief of the Turkish daily Hürriyet, Enis Berberoğlu, was also included on the PM list of Kılıçdaroğlu. Journalist and politician Tuncay Özkan, who was prosecuted as part of the Ergenekon investigation and later released pending trial in May, was included on Kılıçdaroğlu's PM list as well.

On Friday, Kılıçdaroğlu secured his party leadership post in a closely contested election, with 740 delegates voting for him, while his rival Muharrem İnce, who resigned from his deputy chairmanship position to be a candidate as party chair, received 415 votes. In his vote of thanks, Kılıçdaroğlu invited İnce to the stage and depicted a picture of unity by saluting CHP delegates. Kılıçdaroğlu stressed more "unified CHP" goals and said: "There is no more dispute or division.

We will unify our powers." Taking the floor after Kılıçdaroğlu, İnce stated that they will race and they will have disputes, but they will also accept the result without a fight. Even though he gave unity messages on the floor, İnce said that he will continue to be an intra-party opponent and added that Kılıçdaroğlu put pressure on CHP delegates before the congress. He also pledged to destroy the empire of fear built by Kılıçdaroğlu.

The reason for the upcoming extraordinary party congress could be traced back to the presidential election when the secularist CHP nominated Ekmeleddin İhsanoğlu sparking controversy within the party.