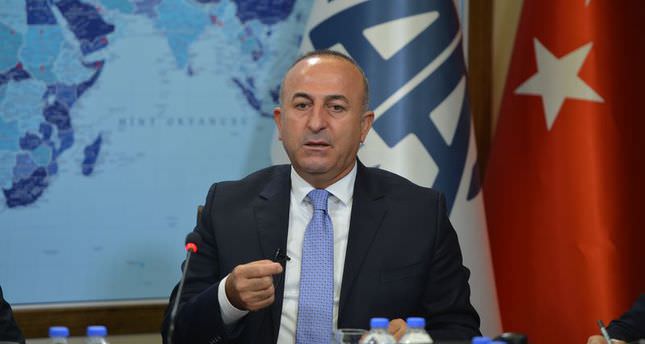 by AA Sep 08, 2014 12:00 am
Turkey's new foreign minister said Monday that the outlawed PKK terrorist group should not receive international weapons meant for use against self-proclaimed Islamic State of Iraq and al-Sham (ISIS) in Iraq.

Mevlüt Çavuşoğlu made his remarks at The Anadolu Agency's Editor's Desk, where he discussed recent developments in the region, especially the threat posed by Islamic State militant group and the security crisis in Iraq.

Çavuşoğlu said he held Iraq's Shia-led government and the predominantly Shia Iraqi army responsible for the crisis in Iraq.

Turkey's top diplomat stressed that the international weapons aid being provided to Kurdish peshmerga forces to boost them in their fight against IS militants should not end up in the hands of the outlawed PKK terrorist group.

"The Iraqi army is largely dominated by Shias and while providing weapons to them, the army and the reconstruction in Iraq should be taken into consideration and terrorist organizations or the outlawed PKK should not receive international weapons meant for use against ISIS," he said.

When asked what Turkey was expecting from U.S. President Barack Obama's plan to fight the ISIS militants, he said, "We do not think it will only be a military action. We expect a comprehensive announcement including economic development, stability and the formation of a unified and inclusive government."

Obama will announce his plan for an offensive against ISIS militants on Wednesday.

Answering a question about "Western fighters" in the Middle East, Çavuşoğlu said Turkey has been taking measures to prevent such people from crossing into conflict zones via Turkey.

"More than 6,000 foreigners considered potential terrorists banned from entering Turkey and more than 1,000 people have been arrested and deported so far," he said.

The issue of foreign fighters' participation in extremist groups in the Middle East arose after the ISIS gained control of Mosul, Iraq's second largest city, in June.

European fighters have fought alongside the ISIS-led militants who have been responsible for killing thousands of people.

Moving on to Turkey-Israel relations, Çavuşoğlu said: "Turkey will of course normalize relations if Israel agrees to our conditions."

Diplomatic relations with Israel were downgraded following the 2010 Israeli attack on the Turkish aid flotilla Mavi Marmara off the coast of the besieged Palestinian enclave, an attack in which 10 activists were killed.

Turkey imposed three conditions to normalize relations with Israel. The first was an Israeli apology, second, compensation for the victims' families and lifting the blockadge on the Gaza Strip.

He said Turkey had been making efforts for 12 years for peace and stability in the Middle East adding: "However, Israel has always disappointed us."