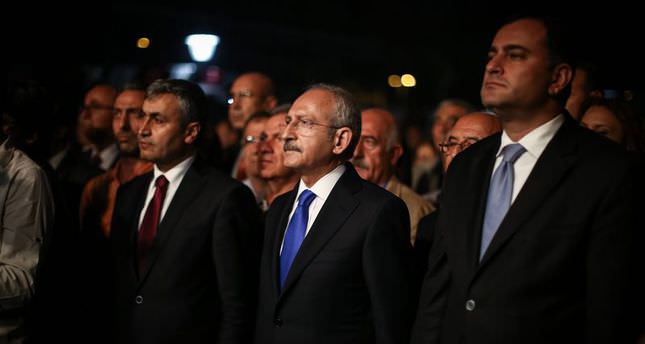 by Daily Sabah Sep 09, 2014 12:00 am
With the 18th extraordinary party congress, initiated after the Aug. 10 presidential election defeat, Turkey's main opposition party, the secularist Republican People's Party (CHP) elected Kemal Kılıçdaroğlu as the party leader for third time. Yet, the dispute within the party does not seem to be reaching a solution anytime soon.

The party administration continued to take initiative to change the party's political approach by including politicians with a right wing background.
Tension escalated with the party's last move that Mehmet Bekaroğlu, who was a member of far-right Felicity Party (SP), transferred to the party and included the Party Assembly (PM) through the "gender quota" within the CHP. The quota, which is a medium to give more seats to women members within the party, was used by Kılıçdaroğlu to include Bekaroğlu at the PM.

Noting that Bekaroğlu received fewer votes than any other candidates in the BYKP, Ayman asked Bekaroğlu to accept that he actually did not win the seat at the PM. "I am inviting Ayata and Bekaroğlu, as scientists, to correct this political mistake, to respect the CHP organization's will and to accept that they did not win PM membership," read Ayman's statement.

Once the names on the PM list become clear, the founding of a new party administration is on the agenda to gain the upper hand in the 2015 general elections. An official meeting with PM members is expected to be held on Saturday as well.According to the Turkish daily Radikal, one issue that caused a crisis within the party is former undersecretary of public security Murat Özçelik's failure to take a seat again at the PA. Özçelik was in charge of the CHP's foreign politics before. When the four key figures that were in the "A team" of the CHP, including the party's Vice Chairman Faruk Loğoğlu, did not manage to take seats at the PM, a crisis erupted in the foreign politics area. Former mufti İhsan Özkes, who was the CHP mayoral candidate in Istanbul's Üsküdar district, was the candidate for the PM who received the most votes at the extraordinary congress. Receiving 637 votes at the party's 17th extraordinary congress in 2013, Özkes increased his votes to 665 at the recent congress.

Özkes is described as "the face of the CHP opening towards conservative people."This is not the first time that the party is dealing with cracks over "leaning toward right wing criticisms."

In 2008, the CHP occupied the country's agenda with the "chador initiative," started under the leadership of former CHP chairman Deniz Baykal, when several women wearing hijab and chadors were accepted into the ranks of the party by Baykal. A huge controversy and debate started after Baykal's initiative to question the party's sincerity and possible negative effects of the move to the CHP's core principles.

Two years after the "chador initiative," current CHP Antalya Deputy Baykal was forced to resign from party chairmanship office due to a sex tape scandal. Ahead of the extraordinary congress, his name was among the list of possible party chair candidates and he allegedly gave a green light for the nomination.