Headscarf shakes off political rigors but remains a social problem 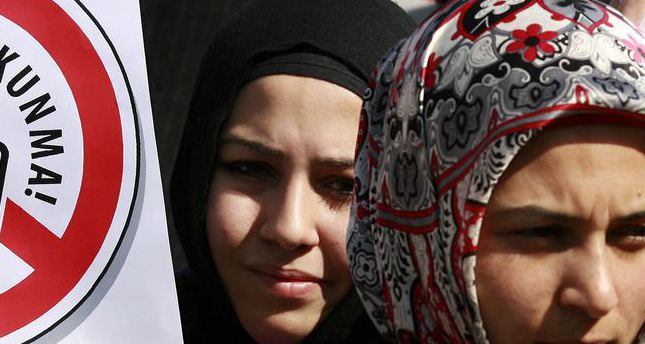 by Ayşe Şahin Sep 09, 2014 12:00 am
Although they are losing the political overtones that reach to the foundations of the Turkish Republic following a law passed on the issue that enabled women wearing headscarves to work in public places, including being members of Parliament, the hijab continues to be a social problem as society is failing to recover from the decades-long rift between the secular and conservative circles in the country.

Headscarves have been a matter of heated political debates since the 1920s and stigmatized as backwardness as well as an impediment to secularism and modernity by the founder of the Republic Mustafa Kemal Atatürk and his rigid supporters. Now, the problem appears to have been solved as the current ruling Justice and Development Party (AK Party) government after 12 years in power abided by its promise to its supporters and passed a law that permitted women who wear headscarves to work in state institutions as part of efforts by the government to invigorate democracy. Current President Minister Recep Tayyip Erdoğan announced a democratization package about a year ago, which many circles thought was far from being satisfactory in a way that fulfilled the desires of the conservative section of society given that they have been longing for a lift on the ban. Some supporters of the hijab remained unpleased with the new law seeing it as insufficient, as the law excludes members of the judiciary and security forces.

Before the new law took effect, the ban applied to teachers, lawyers, parliamentarians and those who worked on government premises. The ban dates back to the 1980s, but heated debates over headscarves at universities and rigid pressure on students wearing headscarves began long before then at the beginning of the 1960s. The ban implemented by the Republican People's Party (CHP) government during the 1980s forced students wearing headscarves to give up either their religious practice or education. Having to choose between the two engendered unease among these students, and the ban was deemed an apparent violation of freedom of religion by the conservative section of the country as well as many liberals.

The ban obviously had a tremendous influence on shaping the politics during these times up until the removal of the ban within the scope of democratization initiatives, and was a matter of controversy between the parties on the right and left. The matter seemed to have been overcome when Turkey witnessed a remarkable moment in its history: four female deputies broke the taboo by walking into Parliament with headscarves and faced no words of protest or anger from opposition parties.

While women who wear headscarves currently enjoy gaining back their rights of belief in accordance with the removal of the ban, the headscarf as a social problem remains unsolved. This primarily stems from the issue being given the cold shoulder in the social discourse as it is seen as a concluded nonissue since hijab-wearing women have gained their right to work in state institutions. How these women will cope with the longstanding "othering" they have faced for decades, however, appears to be the other side of the coin. The problem at this point should be approached from a different perspective that brings into mind the concept that was coined by W. E. B. Du Bois in his theory of African American double consciousness.

The theory, which originally refers to African-Americans struggle with racism, can be applied to any circle, society, nation or group who face discrimination. The concept of 'double consciousness' is defined as "a peculiar sensation […] this sense of always looking at one's self through the eyes of others, of measuring one's soul by the tape of a world that looks on in amused contempt and pity." What strikes one as odd with regards to the issue of women who wear headscarves in Turkey is that, although they constitute half of the female population in the country, they experience the feeling of inferiority in the public for how they look as if they are a minority.

It is possible to bring du Bois' concept of double consciousness into the discussion of women who wear headscarves facing discrimination in Turkish society. An imposed double consciousness creates an identity in these women that is in conflict with their true selves. Striving to be complete, two contrasting identities – one being the true self that is perceived as anachronistic and uncivilized by the section considering themselves superior, and the other identity they adopt to be accepted by society – leads to a feeling of unease in these women.

A prominent Turkish journalist and psychologist, Hilal Kaplan, who stood up against the ban by publishing articles against it, spoke to Daily Sabah and said, "The headscarf was deemed 'abnormal' and 'non-secular' during the ages when the Republic was founded. This very official ideology passed on to the subsequent generations along with hostility swelling year-by-year. So, although I believe the legal steps by the government were an improvement to eliminate the problem, this settled hostility does not disappear so easily."

She further likened the situation of women wearing headscarves in Turkey to African-Americans in the U.S. She said, "Although the U.S. has rigorous laws against racism – every citizen is equal by law – we see that socially, the problem of racism is not fully reconciled. Years of hostility that pass down [from generation to generation] remain in some parts of the country by some circles in the U.S."

She also highlighted the significance of communal efforts to solve the problem socially, yet recalled that the process might take a while.

Life seems to still be tough for these women even though the nation survived the political trauma the country had been going through since the 1920s.The lives of women wearing headscarves who intended to have a proper education and work in intellectual and high-level positions face social obstructions despite laws that liberate them to wear a headscarf.

A teacher wearing a headscarf expressed her feelings over how she is categorized by her own people in her native land. Fatma A., once obliged to work with her headscarf removed to make a living, now enjoys her legal permission to teach classes without having to remove it, but says she still suffers from social problems over wearing it. She says she is often judged by her appearance, especially in districts where people with higher incomes reside, and that people look at her in a different way, which causes her to feel self-conscious about herself. "I am being categorized due to my headscarf and people expect me to behave in a certain way. You can't be too intellectual, too active, too sociable, too stylish, too talkative. Anything that is 'too much.' They expect you to be passive in social life if you are wearing a headscarf; the other way around looks weird to them. I understand them. As for myself, I come from a secular family and was brought up with that mentality. You can't imagine how I was insulted by my own family for wearing a headscarf," she said.

Headscarf debates shifted spheres from politics to society and continue apace within the public as a social 'problem.' The law, incapable of eliminating the problem socially as the hostile attitude of society's secular circles continues, looks like the issue was only dealt with in one sphere and that the country still needs time to recover from the ages-long conflict over headscarves in society.