Turkey among huge coalition against ISIS threat in Iraq, Syria 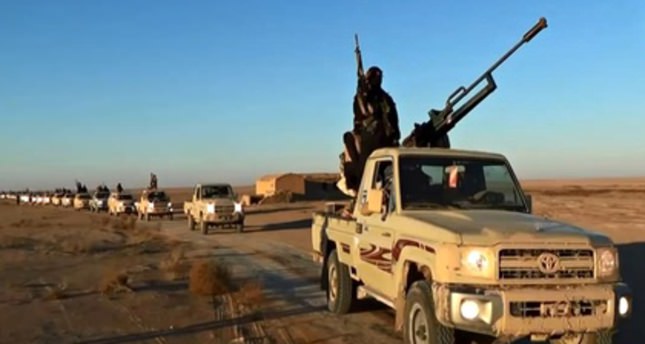 As the U.S.-led anti-ISIS coalition gradually gathers steam, Turkey's crucial support comes with major concern for the safety of its citizens in the hands of the terrorist group

The Islamic State of Iraq and al-Sham's (ISIS) threat to the region, which was the core subject of the NATO summit held last week in Wales, led dozens of countries to pledge their support for a coalition force to fight against ISIS.

Ten countries have formed a coalition against ISIS on the sidelines of the NATO summit in Wales: the U.S., U.K., Germany, France, Italy, Denmark, Poland, Turkey and Canada as well as non-NATO member Australia. However, according to U.S. officials, more than 40 countries have agreed to be a part of the coalition, but those countries and their roles have not yet been disclosed. A security meeting was held in Ankara yesterday, chaired by Prime Minister Ahmet Davutoglu. While the meeting's content was not revealed, the coalition's possible action against the ISIS threat was discussed, according to sources from the Prime Ministry. Reportedly, officials discussed to what extent Turkey will aid the coalition against ISIS, which has held 49 of its citizens hostage for three months.

According to U.S. officials, Turkey is seen as a key to the coalition due to its proximity to the troubled regions of Syria and Iraq. After the two-day NATO Summit in Wales last week, U.S. Defense Secretary Chuck Hagel arrived in Turkey to discuss Turkey's contribution to the U.S.-led coalition against the ISIS threat with Turkish officials.

The American president said that his administration has so far been focused on the problem of ISIS, assessing the situation on the ground. "The next phase is now to start going on the offensive," he said. "I will then meet with congressional leaders on Tuesday. On Wednesday, I'll make a speech and describe what our game plan's going to be going forward."

Speaking to Daily Sabah on Wednesday, Mehmet Özkan, foreign policy analyst at the Ankara-based Foundation for Political, Economic and Social Research (SETA), stated that a larger coalition that includes other Islamic countries means Turkey would not be the sole Muslim country to stand against ISIS's terror and that the participation of other Muslim countries also shows the religious perspective of the opposition against ISIS.

Pointing to Turkey's hostage issue in Iraq, Özkan said Western countries' outspoken expectations on the ISIS threat undermines the 49 citizens of a NATO state that are being held captive by the organization. He added that Turkey is likely to play its role in the coalition behind the scenes for the safety of its citizens.

Obama recently underlined that any offensive on ISIS would not include U.S. troops on the ground and noted that the U.S. will use proxies such as Kurdish forces, the Iraqi army and the moderate opposition in Syria. It will be a multipronged approach, including sharing intelligence, identifying and cutting funds, contributing to political efforts on the ground as well as airstrikes, he said. He also stated that the U.S. needs the support of other countries, especially Sunni ones, including Saudi Arabia, Jordan, the UAE and Turkey. "They need to be involved. This is their neighborhood.
The dangers that are posed are more directed at them right now than they are at us. Our goal should not be to think that we can occupy every country where there's a terrorist organization," Obama said.

U.S. Secretary of State John Kerry is currently in the Middle East in an effort to form the coalition, while President Obama and Vice President Joe Biden have had phone calls with several leaders to discuss the issue. Kerry said a coalition against ISIS militants would need to be durable. "Our global coordinated campaign with a global coordinated coalition will be built not just in a matter of days or weeks, but it will be built to endure for the months and perhaps even the years to come," the top U.S. diplomat said at a press conference ahead of his trip.

US Secretary of State John Kerry said on Wednesday the international community would not sit and watch Islamic State grow and identified Iraq as a key partner in the fight against the group. "We all have an interest in supporting the new government of Iraq at this particular critical junction," Kerry told reporters. "The coalition that is at the heart of our global strategy I assure you will continue to grow and deepen in the days ahead..."
Speaking to his counterparts during the two-day NATO summit in Wales, President Recep Tayyip Erdoğan criticized ally countries for not taking effective necessary measures to stop its citizens from leaving their countries to join ISIS in war-torn Syria and Iraq, both of which border Turkey. Addressing the heads of NATO member countries, Erdoğan said that keeping silent about massacres by regimes in the region is paving the way for terrorist organizations, and thus, necessary measures should immediately be taken with a determination to confront terror activities that threaten global security and stability.

Complaining about Turkey's Western allies' insufficient efforts in combatting ISIS, which has displaced and killed hundreds of thousands of people in Iraq and Syria, Erdoğan told British Prime Minister David Cameron that Turkey had taken all necessary measures. He later told Cameron that Turkey had blocked all foreign citizens whose names were given by the countries from which they held the passports from entering Syria and Iraq. He then said ISIS is more popular in Western countries, and the issue should be questioned by the authorities of these countries. "These people [ISIS recruits] were educated and raised in your country," Erdoğan reportedly told Cameron.

Ali Ünal contributed to this report