İnce slams party chairman for his 'degrading' words to delegates 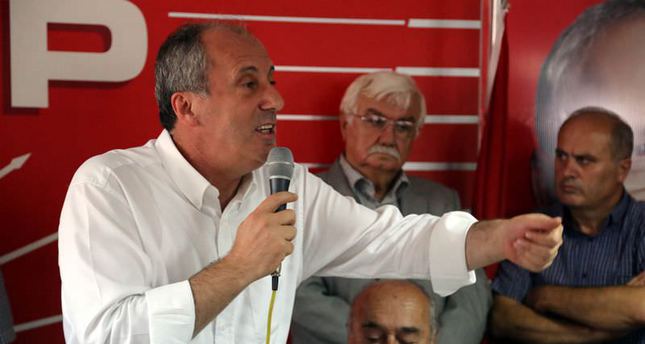 by Daily Sabah Sep 11, 2014 12:00 am
Republican People's Party (CHP) Yalova Deputy Muharrem İnce, who ran for the CHP chairmanship in the extraordinary congress last week and lost to current Chairman Kemal Kılıçdaroğlu, harshly criticized Kılıçdaroğlu's statements toward the delegates who voted against him, with İnce saying that he found this attitude very insulting.

Despite the extraordinary congress being finished, disputes between CHP deputies still remain. İnce claimed that Chairman Kılıçdaroğlu accused delegates of being two-faced in reference to those who signed for his candidacy but did not vote in favor of him, saying, "Nobody can humiliate the party delegate." "He humiliates delegates who voted for me. Namely, 'They did not vote for the status,' he says. Dear chairman, you should look at the box first, then you may notice who really voted for 'status.' This logic is inaccurate. This is scorning the delegate and the voter," İnce said and added, "There is a structure that is full of people insulting voters for giving their votes in exchange for pasta and coal. This is the same logic in which delegates are also insulted. It is impossible to come to power with this mentality."

İnce also panned Kılıçdaroğlu for calling the delegates "two-faced," because they did not vote in favor of him despite pledging that they would. "How wrong! We need to look at why people are compelled to pledge. I think we need to leave this logic aside in which people are forced to sign up for something," he said. "The people voted in favor of me but pledged to vote for Kılıçdaroğlu are not two-faced. In fact, the people who made this pressure [to sign for candidates] are the real two-faced ones. They are not democratic either,"

With the 18th extraordinary party congress, initiated after the Aug. 10 presidential election defeat, CHP Kılıçdaroğlu as the party leader for third time. Yet, the dispute within the party does not seem to be reaching a solution anytime soon.

The party administration continued to take initiative to change the party's political approach by including politicians with a right wing background. Tension escalated with the party's last move that Mehmet Bekaroğlu, who was a member of far-right Felicity Party (SP), transferred to the party and included the Party Assembly (PM) through the "gender quota" within the CHP. The quota, which is a medium to give more seats to women members within the party, was used by Kılıçdaroğlu to include Bekaroğlu at the PM.