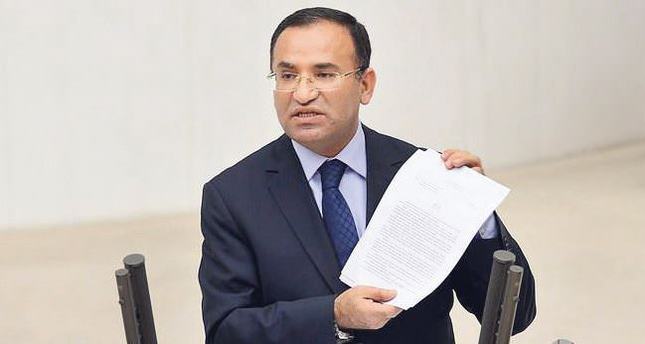 A chamber of Turkey's Supreme Board of Prosecutors and Judges has been at the center of debate after its controversial decisions, which led to harsh criticism from the justice minister, who accused some members of the chamber of disobeying the law

Justice Minister Bekir Bozdağ in a televised interview criticized the 3rd Chamber of the Supreme Board of Prosecutors and Judges (HSYK) for exceeding its prerogatives outlined by the law in accordance with their personal ideologies instead of legal provisions.

The majority of 3rd Chamber members are believed to have links with the Gülen Movement, which is accused of masterminding the Dec. 17 coup using its followers in the judicial bodies and the national police department attempting a coup. "Some members of HSYK's 3rd Chamber are not only stretching the limits outlined by the Constitution and the law, but they go beyond these limits and contravene them," Bozdağ said, who claimed this was an explicit act of violation.

Criticizing the advancement of some files by some members of the 3rd Chamber while thousands of other files waited, Bozdağ said that the 3rd Chamber does not have the prerogative to ignore the decisions of the chair, however, they did base the annulment provision of the Constitutional Court's law on HSYK. "The Constitutional Court did not annul the article pertaining to the regulation of the chair's prerogatives. Rather, they commented on the preambles," said Bozdağ and added that the 3rd Chamber has made a wrong decision based on the preambles rather than the court's decision. He continued by saying that the chamber could either rule to conduct an investigation or to reaccept the request for an investigation according to legal provisions.

According to Bozdağ, the main reason behind this issue is due to the fact that some members apply a dissenting opinion and violate the law based on their ideological views, allegedly shaped by the Gülen Movement, which is led by U.S.-based imam Fethullah Gülen who lives in self-imposed exile in Pennsylvania.

The 3rd Chamber has clashed with the government when it ruled against prosecutors including Turan Çolakkadı and Oktay Erdoğan, who questioned the series of lawless procedures following the Dec. 25 operation and requested an investigation into them. Likewise, the chamber has also opposed Bozdağ's prerogatives and said that he does not have the authority to appoint inspectors to HSYK's Inspection Board.

The HSYK has recently decided to investigate the accusations against Prosecutor İrfan Fidan and Judge İslam Çiçek, both of whom are looking into the case investigating illegal wiretappings by police officers allegedly linked to the Gülen Movement.

The HSYK has also evaluated Gülenlinked Prosecutor Zekeriya Öz's case. Öz is accused of losing his objectivity as a prosecutor when he tweeted adverse thoughts about former Prime Minister Recep Tayyip Erdoğan and implied that he should die, but without citing his name: "No one should desire dictatorship after the last century. His end will be like Saddam and Gadhafi. Whoever adopts lawlessness will pay the price." These remarks led many to question Öz's impartiality, belief in the rule of law and cast doubt over his objectivity as a prosecutor.

Prime Minister Ahmet Davutoğlu and President Erdoğan have made it clear that Gülenist infiltrators will be held accountable for their betrayal and attempting to take over the state through a coup. Currently, dozens of alleged Gülenist agents in the police have been arrested while more arrests are expected as police interrogate several other suspects and conduct a deep investigation into numerous institutions including the police department and the Telecommunications Directorate (TİB).

The movement has grown hostile toward the government following the government's announcement that they would close down prep schools, which disturbed Gülenists as they own most of the prep schools in the country and recruit future supporters through these institutions.