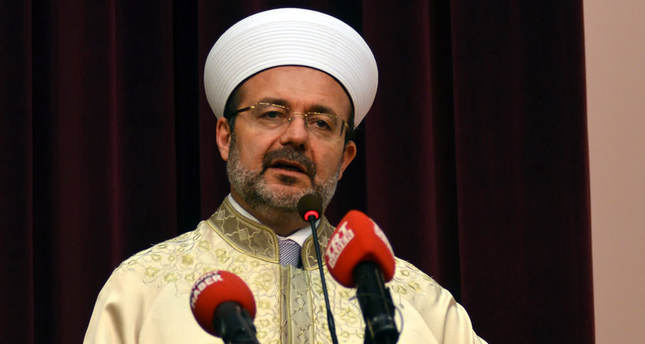 by Daily Sabah Sep 11, 2014 12:00 am
Mehmet Görmez, the head of Turkey's Directorate of Religious Affairs, has denounced the religious groups' interference in politics, implying Gülen Movement's infiltration into state institutions.

Görmez speaking on state-owned TV channel Turkish Radio and Television Corporation (TRT), assessed current religious groups' attempts to be involved in politics. Referring apparently to the Gülen movement Görmez said, it is the body's duty to defend religious movements which provides society with ease in carrying out their religious duties towards God, but some lose their ways and desire political power.

The Gülen Movement that Görmez is thought to be referring to is accused of wiretapping thousands of people including Turkish government officials and encrypted phones, with the help of affiliated members of law enforcement, public prosecutors and judges. Gülen's followers are believed to have orchestrated a corruption probe against Erdoğan and his inner circle, which emerged last December, in order to overthrow the government.

Görmez implicitly criticized the movement in question accusing it violating laws by moving away from its true mission in the name of obtaining a meaningless power. He further slammed such groups for 'stealing society's beliefs'.

Görmez also touched on the directorate's being attached to the prime ministry, deeming it as a significant step.

Görmez speaking on state-owned TV channel Turkish Radio and Television Corporation (TRT), stated that he was content with the decision to link the body directly to the prime ministry and further extended his appreciation over importance Davutoğlu placed on the body.

Up until the new decision by the cabinet, the directorate was always attached to one of the deputy prime ministers. Görmez, considering the move as a vital step towards autonomy, said: "The decision was shocking to some, but in fact it was not something to be surprised about taking the body's history and reputation within the society as well as across the world into account."