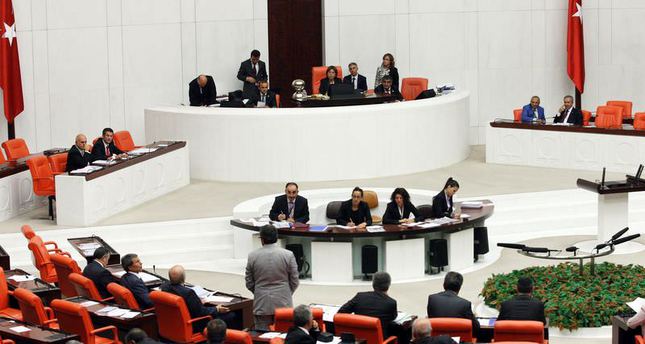 by Daily Sabah Sep 12, 2014 12:00 am
On Friday, President Recep Tayyip Erdoğan approved an omnibus bill, which includes litigation for the mining industry that was tabled after the Soma coal mine disaster in May – which killed 301 miners in western Turkey – as well as the appointment of 35,000 teachers.

The legislation, which passed through Parliament on Wednesday morning, includes amendments to laws regarding mining, contact laboring, structuring of state holdings as well as 42 other laws.

Thirty-five thousand teachers and 1,000 other civil servants working for the National Education Ministry's other service departments will be assigned to their posts until Dec. 31, 2014, according to one of the other amendments.

Speaking to the press on Friday, Education Minister Nabi Avcı stated that by next Friday, Sept. 19, all 35,000 teachers will have been notified of which school they have been appointed.

The bill also stipulates that municipalities with a population above 10,000 will establish dormitories in the appropriate places.

The stay or cancellation of a court decision to appoint or re-assign high-state officials to posts as well as removing them from positions and demoting them will be implemented in two years, and they will be appointed to different positions.

Civil servants who fail to abide by the court decision will face charges, but the discipline judgments will be confidential.

Following the approval of the bill, parliamentary sessions have been postponed until the constitutional opening on Oct. 1. The bill will take effect once it is approved by the president.

According to the newly passed bill, the insurance debts of miners who lost their lives in the coal mine disaster in Soma will be canceled. The
families of the victims of Soma will receive a "death" salary regardless of their monthly income. One of the relatives of each Soma victim will also be provided with the right to reside in state institutions.

The bill will come as a relief to miners. According to the bill, the seniority requirement will be removed and miners' working time is not to exceed 36 hours per week and six hours a day. The retirement age will also be reduced to 50 from 55.

Paid leave, annual leave, education and course duration, the period of preparation before and after work and national holidays, will be counted as working time for laborers who are insured to work in areas such as mines, tunnels and drain construction sites, and employers will have to assign a job security expert, a doctor and health staff.

The miners working in lignite (brown coal) and coalmines are also not to be paid less than double the minimum wage.

The disaster in the town of Soma in the Manisa province surpassed the death toll of a 1992 firedamp explosion in the mining town of Zonguldak on Turkey's Black Sea coast, in which 263 miners died.

Mines and stone quarries are some of the most dangerous places to work in Turkey, according to government statistics.

Since 1941, more than 3,000 people have died in Turkey and more than 100,000 have been injured in mining accidents, figures from Turkey's statistics agency indicate.