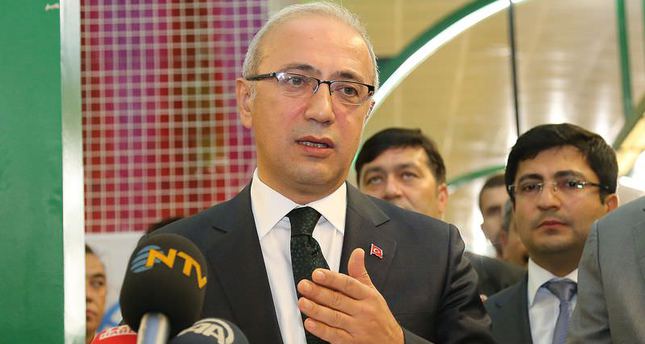 by Daily Sabah Sep 12, 2014 12:00 am
Turkey's Minister of Transportation, Communications and Maritime Affairs Lütfi Elvan responded to questions about the new Internet bill that became a law earlier this week as part of the omnibus bill passed by Parliament saying that the government is not trying to limit freedom of the Internet by any means, contrary to claims, as the law has been formed in accordance with EU regulations and legal norms.

Known as the new Internet law in Turkey, the law authorizes the country's Telecommunications Directorate (TİB) to store traffic information and adapts the current regulations to Article 22 of the Constitution in efforts to take immediate action during times of national emergencies and block access to content posing an imminent threat to national security.

"Turkey is the country that asked for the preparation of a Universal Internet Manifesto," said Elvan, who said that Turkey is also the country with the fastest growing rates of Internet and mobile phone usage. Likewise, Elvan highlighted that the amendments have been made in full accordance with EU legal accession and the allegations that Turkey is restricting freedoms are unfounded.

Elvan explained the motive behind the law in detail and said that the main reason behind it was due to the fact that the courts approached TİB for traffic information but the latter has to approach private companies to obtain it, which is a long process that can take three weeks to a month. However, the courts sometimes need the information immediately and failure to access it within a short period of time delays many other procedures, especially during times of emergency.

Criticizing those who do not have a problem with private corporations holding Internet traffic information, Elvan said that it is not reasonable to trust private firms and not trust government institutions.

According to the law, TİB will be able to store Internet traffic information already held by private firms for up to six months in efforts to send the information to the courts on the day they request the information.

On a different note, Elvan explained that the law was crucial to address the shortcomings of the system during times of emergencies to ensure national security. For instance, previously a top level confidential state meeting held by Turkey's top officials was unlawfully recorded and released on social media sites and the court was unable to block access to the content that contained state secrets. With the new law, TİB will request the blocking of Internet content from the courts within 24 hours and a judge will be obliged to announce the decision within 48 hours.

"Therefore TİB alone will not be the one who will control the issue but will work with the courts," said Elvan, who explained that all institutions are obliged to act in accordance with the law.

In response to questions about opposition to the law, Elvan said that some members of opposition parties also support the law and say it was a necessary move, without citing any names. "Freedoms are not being restricted in any manner," said Elvan, who pointed out that Internet usage in Turkey surpasses the European average and the government is working hard to ensure that all users have access to the Internet with the best regulations so that nobody is victimized. "We are in the process of providing infrastructure for 4G networks," Elvan said, claiming that the government aims to provide a safe environment for all and improve the quality of democracy in the country.

Although the new law has received criticism from different actors, similar and even more restrictive practices exist in various states. For instance, in 2013, the U.S. government requested user data from Google without a warrant 11,000 times, 42 percent of the global total, followed by India with 2,700 requests. Boingo, a U.S.-based Internet company providing Wifi services at Canadian airports, also faced scrutiny after secret documents were leaked by Edward Snowden about the incident when Communications Security Establishment Canada (CSEC) collected data in an unauthorized manner from thousands of passengers who used Canadian airports.