US Secretary of State arrives in Turkey to meet officials 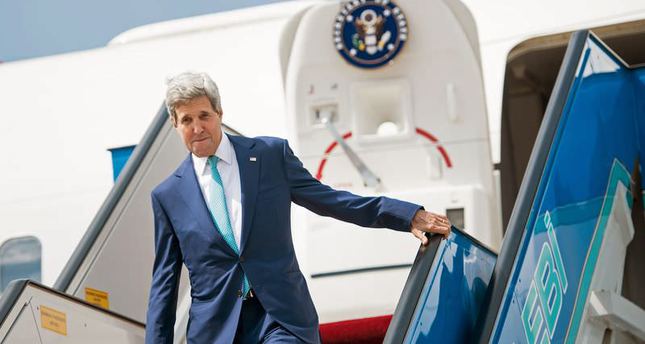 by AA Sep 12, 2014 12:00 am
U.S. Secretary of State John Kerry has paid a two-day visit to Ankara for a series of meetings following his Middle East tour as part of the U.S.' efforts to gain support in fighting against the self-proclaimed Islamic State of Iraq and al-Sham (ISIS).

Kerry, speaking to the press at the Turkish foreign ministry on Friday, said he and his team will have a very full agenda and they look forward to constructive conversations with his Turkish counterpart Mevlüt Çavuşoğlu, Prime Minister Ahmet Davutoğlu and President Erdoğan.

Kerry and Çavuşoğlu have met for a third time since the NATO Summit in Wales in early September.

"We are important partners, but not just in NATO. We have concerns with respect to what is happening in Libya, Mali to the horn of Africa and throughout the Middle East, and of course, the events in Iraq so we have a great deal to talk about."

"We will be chairing a counter-terrorism forum at the UN Security Council in a few days," Kerry said.
Çavuşoğlu stressed that they will particularly focus on Iraq and Syria.

Kerry is also scheduled to meet with President Recep Tayyip Erdoğan and Prime Minister Ahmet Davutoğlu during his short visit.

Kerry's visit comes after ten Arab states signed a joint communique in the western Saudi city of Jeddah on Thursday to fight ISIS, pledging to take action to stop the flow of fighters from joining the group.

Turkey, who also participated in the meeting in Jeddah, refrained from signing a joint declaration on the fight against ISIS.