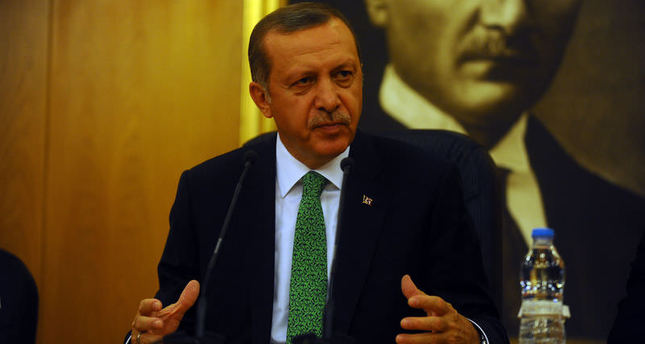 by AA Sep 14, 2014 12:00 am
Turkey's stance towards all terror groups, including those in its territory as well as foreign-based ones, has always been clear and such sensitivity will always continue, Turkish President Recep Tayyip Erdoğan has declared.

President Erdoğan's comments came at a press conference at Istanbul Ataturk Airport on Sunday as he left for Qatar, two days after meeting U.S. Secretary of State John Kerry to discuss the U.S.' strategy to "destroy" the extremist Islamic State of Iraq and al-Sham (ISIS) militant group. Erdogan said: "We shared Turkey's concern on all types of terrorism.

"We have our own fight with the terrorist groups in our country, but we are also aware of the terrorist groups outside our borders." Erdoğan and Kerry held a 2.5 hour-meeting in Ankara on Friday, where the U.S. Secretary mentioned an international plan to "destroy" ISIS. "We have the same attitude with Qatar regarding the worrying developments in the region and the ways to overcome it," Erdogan added.

Turkey refrained from signing a treaty foreseeing a coordinated campaign, including military measures, against ISIS in Saudi Arabia on Thursday. ISIS militants have captured large swathes of land in Iraq and Syria, on which it has declared what it calls a cross-border Islamic "caliphate". Violence instigated by ISIS militants has displaced an estimated 1.2 million Iraqis.