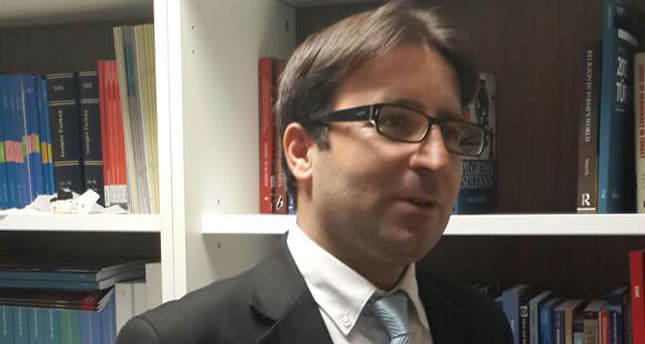 Ending sectarian politics and establishing a new inclusive government in Baghdad is essential to diminishing the continuing support for the Islamic State of Iraq and al-Sham (ISIS), foreign policy expert Mehmet Özkan stresses

Last week, U.S. President Barack Obama announced a four-stage plan to combat the ongoing Islamic State of Iraq and al-Sham threat in the Middle East. Daily Sabah spoke with Dr. Mehmet Özkan, the director of the International Center for Terrorism and Transnational Crime, about Obama's plan, its efficiency, Turkey's position in this conflict and the possible solutions for the situation.

How do you evaluate the four-stage plan to combat ISIS announced by Obama?

There are expressions implying the U.S. would continue its air raids and its cooperation with the neighboring countries. It can be seen that there is almost nothing new in the plan. However, this was important in the sense that the U.S. has now stated a clear intervention strategy.

We can interpret the emphasis on Syria in Obama's speech as an effort to refute the allegations that the U.S. was trying to cooperate with Bashar Assad to terminate ISIS. The plan fundamentally aims to maintain the ongoing air raids on ISIS and arm local elements such as Kurds in the war against ISIS.

Visits by U.S. Secretary of State John Kerry to the region can be evaluated as an effort to restructure Iraq after weakening ISIS.

Do you think that the ISIS threat could be terminated if Obama's plan is put into action?

I don't think so because there is more than one dimension to the emergence of ISIS. The Arab Spring provided the chance for Salafis and radical groups to represent themselves in politics. However, with the regression of the Arab Spring, these radical groups are feeling alienated. I think providing political representation to the radical groups is the top priority. Secondly, it is known that Sunni groups in Iraq support ISIS because they are fed up with Iraq's central government. Ending the sectarian politics and establishing a new inclusive government in Baghdad is essential to diminishing the support for ISIS. Thirdly, because the other Islamic movements in the world do not appeal to the young, Salafi and radical movements are on the rise. Groups such as ISIS that claim they have found a solution for all of the problems by interpreting a couple of ayahs become more attractive for young people. To solve problems originating from structures such as ISIS, religious policies should be restructured.

Without having permanent solutions in these fields, threats from radical groups like ISIS will continue.

How do you respond to the conspiracy theories that claim ISIS was established by the intelligence agencies of some countries?

I don't think that analyzing these theories is relevant in the struggle against ISIS. We have a reality, and this issue needs to be resolved. The founders of ISIS and with whom they have relations can be the topics of another discussion, but these discussions prevent us from facing the real issue. This is a group that has its own military and economic power and agenda; therefore, it is more important to provide a policy against this structure. After 10 years of experience, the Turkish intelligentsia needs to give up interpretations that focus on what others did. What we should do and which policy we should produce is much more important than that. I think that statements such as these neglect freedom in the intellectual sense and are not healthy.

Where is Turkey in this equation?

Turkey knows that ISIS is a threat; however, Turkey is not able to act as the vanguard because of the 49 diplomatic personnel being held hostage in Mosul. The number of countries that are participating in the struggle against ISIS recently increased to 40. According to the decision at the Jeddah meeting, Arabs are intending to have an active role in this. Thus, with the participation of many Muslim-majority states, this issue became more than NATO's business. Increasing the number of Muslim-majority states prevents Turkey from being the only country with a largely Muslim population to participate in this struggle, which will strengthen Turkey's hand. More importantly, Turkey is conducting a lot of business in the background. However, it is not possible for Turkey to come to the fore, not at this stage. With an example like the killing of James Foley, Turkey needs to carry out a delicate policy to bring 49 diplomatic personnel back to the country, as the general elections are eight months away. Therefore, there are not many options for Turkey other than supporting this struggle covertly.

How is Turkey's current situation perceived by the coalition established to combat ISIS?

I think that they know Turkey's sensibilities very well. However, earlier Turkey was pushed to the fore. The Western media that claimed that Turkey was supporting ISIS changed its mind; now, they want to put Turkey against ISIS. Especially after the NATO summit at Wales and the increase in news stating that Turkey will have an active role in the struggle indicates a subtle purpose against Turkey. There is an intention there. They are trying to present the situation as a war for the sake of the West, by saying, "Let Turkey solve a problem that was created by the West." Even though Turkey pointed out the threat many times regarding the Syrian conflict, due to the West's stolidity, groups such as ISIS emerged. This issue may create new groups in a couple of months or years. To conclude, I think the West's attitude is far from being principled on this subject, and this is not a healthy stance.

So, is it possible to say that there will be a decrease in news stating Turkey is supporting ISIS?

I think this kind of news is senseless. These kinds of allegations are never proven; these are only efforts to weaken the government in Turkish domestic politics. However, the people who come up with this news made fools of themselves. I don't think that they will apologize in any manner, but I do think that they have understood the senselessness of coming up with this kind of news.

Iran is supporting Kurds in Iraq in the fight against ISIS. Can this situation end with closer relations between Iran and the U.S.? How will this affect Iran's position in the region?

Iran is in both a comfortable and uncomfortable position. They are uncomfortable because there is a probability of ISIS turning to Iran after Baghdad. On the other hand, they are occupying the West with ISIS , which eases their position in nuclear negotiations. By focusing on the ISIS issue, it is possible to say that Iran's hand is strengthening regarding the Syrian conflict. Apparently, Iran is conducting a "wait and see" policy. I think Iran's support in the fight against ISIS is profusely visible and tactical.

Do you observe a decrease in Sunni groups' support for ISIS in Iraq?

There has not been a major decrease; however, there is a conflict between some Sunni tribes and ISIS. ISIS will be forced to tread carefully because if the Sunni tribes unite against ISIS, ISIS may not be able to secure their hold in Iraq. Their reason behind the current support is due to no other option being available. If the central government does not become more inclusive and does not include Sunnis in the decision making process, there will not be any other option for Sunnis. Iraq is currently separated into three parts. Sunnis may not be satisfied with the disposition of ISIS in the international community regarding its legitimacy; however, they are with a group that they "feel they belong to." Sunni groups see themselves closer to ISIS than the government.

You state that the future of ISIS is directly affected by an inclusive government that includes Sunnis.

Definitely. How inclusive the government will be is very important. If the Sunnis see a light of hope in the government, they may turn and carry out policies not to harbor ISIS in the region. I think Sunnis will not gain anything politically in the long term by standing with ISIS. After all, Sunnis will not be pleased with U.S. bombardments on their cities. To conclude, the central government's inclusiveness will directly affect Sunnis' attitude toward ISIS and the future of politics in Iraq.

Who is Dr. Mehmet Özkan?

Dr. Özkan is the director of the International Center for Terrorism and Transnational Crime (UTSAM) and a professor of International Relations at the Turkish National Police Academy. He is also a senior researcher at the SETA Foundation in Ankara. He studied in South Africa, India, Spain, Sweden, Colombia and Egypt and also taught in Bosnia-Herzegovina. His articles have appeared in many journals in Arabic, English and Spanish; he is the author of "Foreign Policy after the Tahrir Revolution" (2011). His main area of expertise is Turkish foreign policy, the Middle East, Africa and the rise of non-Western Powers.
Last Update: Sep 15, 2014 10:32 am
RELATED TOPICS