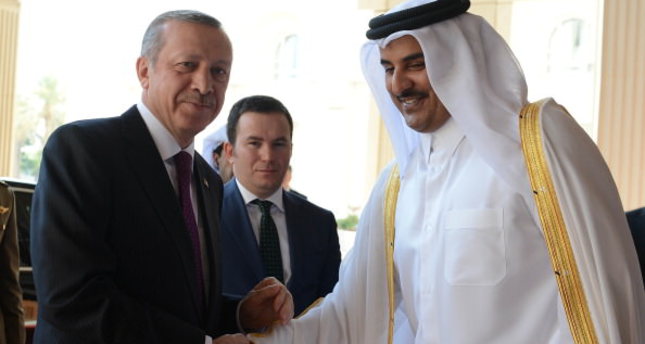 Before departing for Qatar on Sunday, Turkish President Erdoğan told press that NATO member Turkey and its regional and international allies are determined to combat terrorist organizations that threaten security and stability in the region

President Recep Tayyip Erdoğan paid an official visit to Gulf ally Qatar on Sunday to discuss various regional issues including the Islamic State of Iraq and al-Sham (ISIS) crisis, the situation in war-torn Gaza and mutual relations between the two countries. Erdoğan paid a diplomatic visit to Qatar on Sunday as the invitee of Qatari Emir Sheikh Tamim bin Hamad al-Thani. Among the most significant allies of Turkey, Qatar became the third country Erdoğan has visited as president and the first in the Middle East after he went to Northern Cyprus and Azerbaijan at the beginning of September.

Prior to his departure from Istanbul Atatürk Airport on Sunday afternoon, Erdoğan said Turkey's views on regional issues mainly match Qatar's stance, and as for relations between the two states, Erdoğan said there have been positive relations in the past several years and good relations continue with a firm determination.

Commenting on the ISIS crisis in neighboring Iraq and Syria, Erdoğan said that Turkey is closely discussing the issue with Qatar and other Gulf countries. "The Gulf 's security and stability is as important as our country's," he added.

According to sources in the Presidential Office, Erdoğan will discuss the latest developments in the Middle East during the visit, especially the issue of ISIS, Palestine and Egypt. Erdoğan will return to Ankara on Monday evening, the sources said.

Regarding the visit, Foreign Minister Mevlüt Çavuşoğlu said that Erdoğan's visit to Qatar "reveals a brotherly relationship between the two countries with both sharing common regional issues and a similar goal in working for peace and justice in the region."

During Israel's Gaza offensive the U.S. held meetings with Qatar and Turkey, the two countries that showed the strongest support to war-stricken Palestinians in Gaza. Qatar and Turkey were the only regional countries to back the Muslim Brotherhood after Egypt's army toppled Islamist President Mohammed Morsi last year after mass protests against his rule.

As Erdoğan discusses regional issues with his Qatari counterpart, Prime Minister Ahmet Davutoğlu evaluated U.S. President Barack Obama's combat strategy to deal with ISIS militants while raising concerns about a number of subjects pertaining to the matter. "America's strategy is a necessary one, but it is not sufficient to establish order and achieve political stability," said Davutoğlu, who asserted that the issue couldn't possibly be resolved without taking Syria into consideration. He said the only way to prevent further radicalization is to ensure that an inclusive political system is achieved. Furthermore, he said that the success of Obama's plan is not only dependent on security parameters but also on its adaptability with political parameters and that it will not resolve issues if it fails to include marginalized groups.

Top diplomats from the U.S. and Turkey met on Friday to discuss what Ankara is willing to contribute to a growing worldwide coalition to defeat the ISIS militant group. U.S. Secretary of State John Kerry paid a two-day visit to Ankara for a series of meetings following his Middle East tour as part of the U.S.' efforts to gain support for the coalition fighting ISIS. "[W]e are important partners, obviously, in NATO, but not just in NATO. We have concerns with respect to what's happening from Libya to Mali to the Horn of Africa and throughout the Middle East, and of course, now the events in Iraq. So we have a great deal to talk about," Kerry said. "We will be chairing a counter-terrorism forum at the U.N. Security Council in a few days," Kerry said.

After days of holding meetings behind closed doors, Turkish officials have decided to provide support to the growing anti-ISIS coalition, including intelligence, humanitarian and security assistance. However, Turkey will not engage in active military activities against ISIS, which has held 49 of its citizens hostage for the past three months. Ten countries formed a coalition against ISIS on the sidelines of the NATO summit in Wales: the U.S., U.K., Germany, France, Italy, Denmark, Poland, Canada and Turkey as well as non-NATO member Australia. However, according to U.S. officials, more than 40 countries have agreed to be a part of the coalition. According to media reports, Turkey will not allow the coalition to attack ISIS in Iraq and Syria from its air bases, nor will it take part in combat operations.

Other than contributing to the coalition by other means, Turkey will cooperate with Western countries in stopping potential ISIS fighters. Çavuşoğlu recently said more than 6,000 foreigners who were considered potential terrorists have been banned from entering Turkey.

Furthermore, battling the influx of foreign fighters from Europe seeking to join violent armed factions in Syria, such as ISIS, Turkish authorities have detained many foreign nationals, including German and French citizens, attempting to cross the border into Syria.
Last Update: Sep 15, 2014 1:11 am
RELATED TOPICS