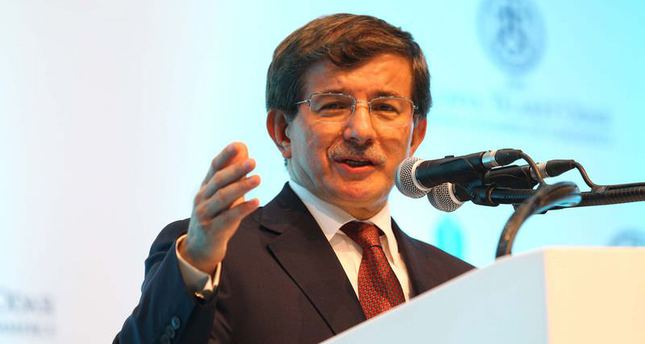 by Daily Sabah Sep 15, 2014 12:00 am
Prime Minister Ahmet Davutoğlu in a press statement recently addressed the leaders of opposition parties and told them that President Recep Tayyip Erdoğan is outside of politics and that they should take Davutoğlu as the political correspondent of the government rather than Erdoğan and dispose of their antagonistic political approach and replace it with a more tolerant and conciliating attitude.

Addressing Republican People's Party (CHP) leader Kemal Kılıçdaroğlu and Nationalist Movement Party (MHP) leader Devlet Bahçeli at a meeting held at the Prime Minister's Dolmabahçe office, attended by Deputy Prime Minister Yalçın Akdoğan, Minister of Education Nabi Avcı and others, Davutoğlu responded to allegations about polarization in society and politics. "I am in favor of an easier approach," said Davutoğlu, who criticized the opposition's harsh and antagonistic attitude and expressions.

"I congratulated Kılıçdaroğlu – for his re-election as the CHP's leader – but he did not congratulate me. I shook hands with Bahçeli at the General Assembly, but he told me that I am not the real prime minister of this country," said Davutoğlu, who noted that he expects Bahçeli to show courtesy in politics.

Firmly establishing that it is crucial for all political parties to act under a framework of respect, tolerance and courtesy for each other, the prime minister said that Erdoğan is no longer the political correspondent of the AK Party and that the opposition should direct their political criticism and concerns of the ruling party to Davutoğlu rather than the president who does not hold a political position.

Touching upon claims that President Erdoğan has polarized society, Davutoğlu stated that the allegations were unfounded, as Erdoğan has not shown a discriminatory and polarizing attitude since he was elected as president. He noted that Kılıçdaroğlu was the one who did not attend the inauguration ceremony, while in a disrespectful move a CHP deputy threw a statute at the Parliamentary speaker prior to the inauguration ceremony. "Erdoğan has openly said that he is ready to speak with everyone," Davutoğlu said.