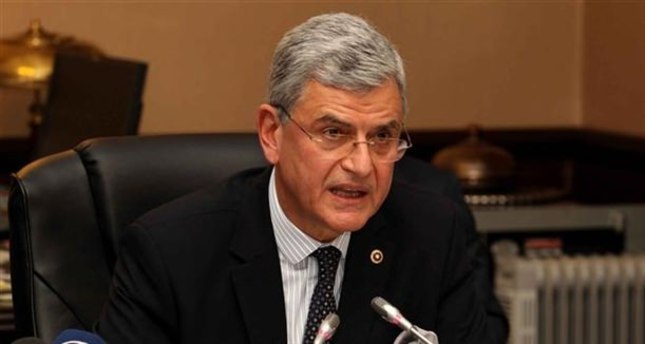 by Daily Sabah Sep 15, 2014 12:00 am
Turkey's EU Minister Volkan Bozkır said that Turkey did its share to promote relations with Armenia and that everyone needs to live together by avoiding the mention of what happened in the past.

While paying a visit to Lisbon, Turkish EU Minister and Chief Negotiator Volkan Bozkır touched upon normalizing ties between Turkey and Armenia in regard to the mood of optimism witnessed in the last few months. Underscoring the significance of President Recep Tayyip Erdoğan's letter on April 24, Bozkır said, "With this letter, we showed that we are turning over a new leaf to heartbreaking events and offer a hand of peace. If [our] counterpart accepts this hand, we may open a new page. It is impossible to walk [together toward] the future of the world with hatred and by killing each other."

Bozkır was also hopeful for the future of both countries' relations by taking the urgency of both sides' tolerance into account. "From now on, it is a must for everyone to live peacefully and leave past incidents behind. We, as the Republic of Turkey, did our bit." he said.

Meanwhile, a mood of optimism between Turkey and Armenia is salient especially after then Prime Minister Erdoğan made a statement of condolence to Armenians on April 24. This had broad repercussions in the foreign press, and in a statement Armenian President Serzh Sargsyan made the same day, he stressed that Armenia does not consider Turkish society as an enemy.

In the statement, which was issued in nine languages including Armenian, Erdoğan said, "[he] wishes Armenian people who lost their lives under the conditions of the beginning of the 20th century to rest in peace" and he "sends [his] condolences to their grandchildren […] Having experienced events with inhumane consequences such as relocation, during World War I, should not prevent Turks and Armenians from establishing compassion and mutually humane attitudes toward one another."

As a result of this optimistic atmosphere, President Sargsyan was invited to Erdoğan's presidential inauguration at the on Aug. 28. While Armenian Foreign Minister Eduard Nalbandyan represented his country at the ceremony, President Sargsyan had also congratulated the election of Prime Minister Recep Tayyip Erdoğan as Turkey's president. In a statement he said that he is hopeful that Erdoğan will greatly contribute to the establishment of bilateral relations between Armenia and Turkey without any prerequisites. This sort of optimism had been witnessed between two countries a few years ago. In 2008 Sargsyan had invited Turkish President Abdullah Gül to Armenia to watch the 2010 FIFA World Cup qualifier match between Armenia and Turkey. Gül attended the game in Armenia while Sargsyan paid a reciprocal visit to Turkey to watch the return game in October of the following year.

In addition, during this football diplomacy, the two countries' foreign ministers, Ahmet Davutoğlu and Nalbandyan signed protocols on establishing diplomatic ties between their respective countries on Oct. 10, 2009 in Geneva, Switzerland. Mediated by the U.S., the protocol had presupposed the opening of the border between Turkey and Armenia. However, the process ended before the protocol conditions were approved by the Armenian National Assembly, as Sargsyan said on TV in 2010.
Last Update: Sep 15, 2014 10:33 am
RELATED TOPICS