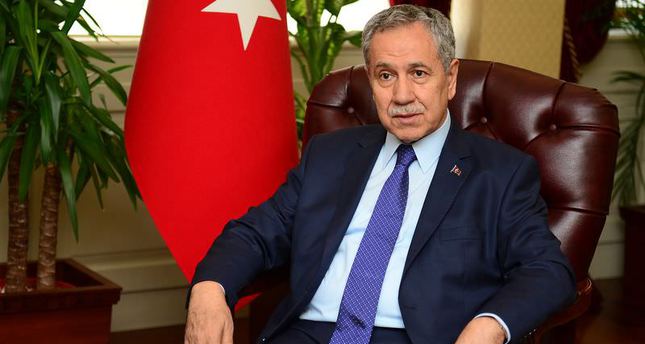 by Daily Sabah Sep 16, 2014 12:00 am
During the Cabinet meeting on Monday, Deputy Prime Minister Bülent Arınç said that Turkey's EU bid was on the table, and the government is working on a three-step course of action that includes a five-year window for new arguments to be set in the negotiation process.

After the six-hour Cabinet meeting in the central building of the Prime Ministry under the leadership of Prime Minister Ahmet Davutoğlu, Deputy Prime Minister and spokesman Bülent Arınç held a press conference about the meeting. Arınç said that the main topic of the meeting was Turkey's EU negotiation process and that EU Minister and Chief Negotiator Volkan Bozkır gave an in-depth presentation. "A new but scheduled course of action that will be carried out in a particular period was prepared. […] The first step reserves a three-and-a-half-month course of action that lasts through the end of 2014. Then, until the 2015 general elections, the second step will be conducted. Lastly, we plan to continue salient work on the steps until 2019," said Arınç.

The deputy prime minister pointed out that they are trying to overcome shortcomings in the process, and said, "We will carry out a course of action according to the current situation in Brussels. This process also includes removing negative perceptions in both capitals."

Arınç also indicated that during negotiations, major obstacles had arisen in the opening/closing chapters and that this has triggered a perception that Turkey-EU relations had diminished. "Under the leadership of Ahmet Davutoğlu, as the 62nd government of Turkey, we made all of the necessary efforts on this issue by means of a re-evaluation of the whole process, being determined for our goal to join the EU and [agreeing to solve] all problems [through] dialogue and conciliation. You will witness [this] in the course of action we have prepared. […] Together, we will see that the negatives might be easily be solved through bilateral dialogue [throughout] the process."