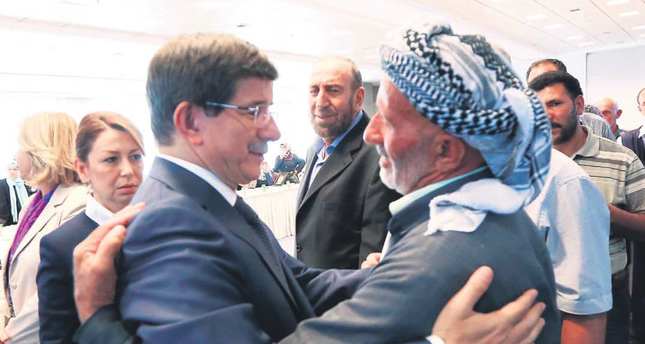 In a region tainted by sectarian clashes and tragedy, Turkey's efforts to resolve the Kurdish issue is the only success story, says Davutoğlu

Prime Minister Ahmet Davutoğlu said there is only one success story in the Middle East and that it is the reconciliation process that has made remarkable progress amid the turmoil that Turkey's neighboring countries are going through. Davutoğlu met with chief editors of media outlets at his office in Istanbul's Dolmabahçe district on Saturday to discuss a couple of issues that top the agenda of the country. Davutoğlu, commenting on the ongoing conflicts that are happening in Iraq and Syria, said the reconciliation process, which aims to end the decades- long conflict between the government and the PKK has been continuing without any obstructions despite efforts to sabotage the process.

Davutoğlu, deeming the process as the only success story in the Middle East added that Turkey made great strides in carrying out the process in a healthy manner. He continued by saying that the Justice and Development Party (AK Party) was the only ruling party in the region that has paved the path of a country in which every section of society in every area lives in peace with each other. "If Egypt, Syria, Libya, and Iraq followed a democratic policy like us, things would have been different," Davutoğlu said. "The process is one of the most significant problems of the last 60 years for Turkey.

There should be a bond between history and the concept of citizenship. If the state bans the wearing of the headscarf even though the society is recognized for having a Muslim identity in history, or tortures people in Diyarbakır prison based solely on their Kurdish identity, those groups detach themselves from the state and a psychological break occurs.

Once certain international and national circles begin manipulating them, terrorism emerges. We, as the AK Party, try to eliminate that period of rupture," Davutoğlu said.

Davutoğlu also added that the Dağlıca ambush, which took place in Dağlıca, Hakkari province on Oct. 21, 2007 in which 12 soldiers were killed and
eight soldiers were captured by the PKK, was what deterred him to go back to his post as an academic. He said, "That was when we analyzed that the ambush will result in a Turkish-Kurdish conflict intensifying in the upcoming days." "Everyone would have laughed at us then if we said [President] Recep Tayyip Erdoğan and Massoud Barzani [Iraqi Kurdistan Regional Government president] would address the public holding each other's hands. This is how far we have come, this is a reconciliation process," Davutoğlu said.

Davutoğlu also touched upon the attempts made to cripple the process, giving the example of allegations against Turkish National Intelligence Organization (MİT) head Hakan Fidan.

Fidan faced an arrest attempt on Feb. 7, 2012 in an operation against him, allegedly carried out by officials linked to the Gülen Movement as he was holding talks with the PKK for the reconciliation process between Ankara and Kurds. "Some MİT officials' infiltration of the PKK was attempted to be portrayed as 'chairing' of the PKK," Davutoğlu said.

Responding to one of the questions of the participants asking when the government will discuss the issues concerning Kurdish demands such as acquiring political and regional autonomy and how much of it can be ensured by the government, Davutoğlu said, "Things have rapidly been changing. What was once impossible to even utter can be freely discussed now. The fear that the country would be divided did not unfold. Right now, we don't see any necessity to change the regulation regarding national education. A vast quota was spared for Kurdish teachers. Education in Kurdish does not pose a problem.

The next step toward the process will be carried out with more ease in my opinion," said Davutoğlu. The Ministry of Education appointed teachers for Kurdish lessons in public schools in an unprecedented move for Turkey where the Kurdish community's demands for the right to learn Kurdish freely was stifled in the past. Davutoğlu concluded his speech by saying there is no turning back from their reconciliation efforts, underlining that the country paid a price to achieve the progress and will not let any provocations jeopardize it.
Last Update: Sep 16, 2014 1:37 am
RELATED TOPICS