Turkey and Qatar focus on regional security, stability and economy 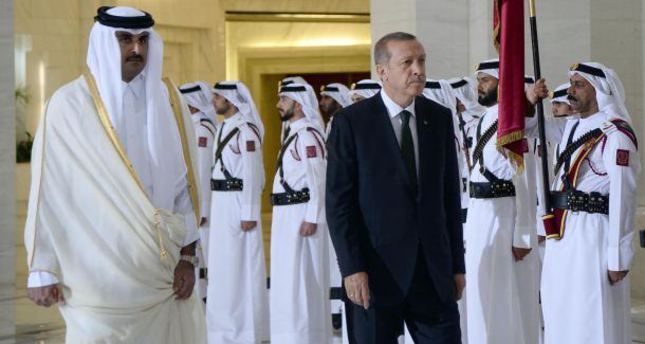 by Mehmet Ali Berber Sep 16, 2014 12:00 am
During his two-day official visit to Qatar, Turkish President Recep Tayyip Erdoğan did not just discuss bilateral ties and economic relations between the two regional allies, but also held talks on various regional issues, including the threat posed by Islamic State of Iraq and al-Sham (ISIS) militants and the worrisome situation in war-torn Gaza. Erdoğan, who began his visit to Qatar on Sunday as the guest of Qatari Emir Sheikh Tamim bin Hamad al-Thani, found the opportunity to confer on key regional developments of key importance for the two countries. Among the most significant allies of Turkey, Qatar is the third country Erdoğan visited as president and the first in the Middle East following Northern Cyprus and Azerbaijan in early September. After an official welcoming ceremony on Monday morning, Erdoğan and his delegation held a meeting with Thani and other Qatari officials. Erdoğan was accompanied on his visit by Energy Minister Taner Yıldız and National Intelligence Organization (MİT) Undersecretary Hakan Fidan.

According to reports, both leaders decided to support a united Syrian coalition that will weaken Bashar al-Assad's hand in the war-torn country. Humanitarian aid to Syria was another subject the two allies discussed.

Erdoğan and Thani also agreed on possible anti-ISIS operations to not harm civilians in the region and to support an inclusive Iraqi government in which all segments of the country will be represented.

Furthermore, the two allies decided to name 2015 the Turkey-Qatar Culture Year and hold a series of cultural activities in both countries to bolster their already good relations.

Prior to his departure from Istanbul Atatürk Airport, Erdoğan said Turkey's views on regional issues mainly match those of Qatar, and as for relations between the two states, Erdoğan said they have been positive in the past several years and will continue with a firm determination.

Commenting on the ISIS crisis in neighboring Iraq and Syria, Erdoğan said that Turkey is closely discussing the issue with Qatar and other Gulf
countries. "The Gulf 's security and stability is as important as our country's," he added.

Relations between Turkey and Qatar have developed further in the last couple of years as the two countries found themselves on the same side regarding the Syrian crisis and the Egyptian coup. Turkey was one of the most vociferous critics of the Egyptian coup that ousted President Mohammed Morsi, while Qatar was the sole Gulf state that raised its voice against the coup. During Israel's Gaza offensive, the U.S. held meetings with Qatar and Turkey, the two countries that showed the strongest support for war-stricken Palestinians in Gaza.

As Erdoğan discussed regional issues with his Qatari counterpart, Prime Minister Ahmet Davutoğlu evaluated U.S. President Barack Obama's combat strategy to deal with ISIS militants while raising concerns about a number of subjects pertaining to the matter. "America's strategy is a necessary one, but it is not sufficient to establish order and achieve political stability," said Davutoğlu, who asserted that the issue couldn't possibly be resolved without taking Syria into consideration. He said the only way to prevent further radicalization is to ensure that an inclusive political system is achieved. Furthermore, he said that the success of Obama's plan is not only dependent on security parameters but also on its adaptability with political parameters and that it will not resolve issues if it fails to include marginalized groups.

Top diplomats from the U.S. and Turkey met on Friday to discuss what Ankara is willing to contribute to a growing worldwide coalition to defeat the ISIS militant group. U.S.

Secretary of State John Kerry paid a two-day visit to Ankara for a series of meetings following his Middle East tour as part of U.S.'s efforts to gain support for the coalition fighting ISIS. "[W]e are important partners, obviously, in NATO, but not just in NATO. We have concerns with respect to what's happening from Libya to Mali to the Horn of Africa and throughout the Middle East, and of course, now the events in Iraq. So we have a great deal to talk about," Kerry said. "We will be chairing a counter-terrorism forum at the U.N. Security Council in a few days," Kerry said.

White House Chief of Staff Denis McDonough signaled Sunday that the State Department will name allies in the coming days that will pledge ground troops to fight ISIS, as the U.S. has said it will not send ground forces. Meantime, McDonough said U.S. personnel will train and equip Iraqi forces and moderate Syrian rebels to combat ISIS.

President Obama announced Wednesday that the U.S. will ramp up air strikes and try to build an international coalition to degrade and eventually destroy the group. ISIS released a video late Saturday showing a militant beheading a British aid worker that was similar to the recent beheadings of two American journalists.

Facing strong public opposition to sending U.S. troops back into the Middle East, Obama said he doesn't plan to do so. But he said ground troops of some form are essential, a point McDonough was asked about on several Sunday talk shows. McDonough repeatedly declined to name any nations willing to provide ground forces and he was cautious in suggesting what might develop.
Last Update: Sep 16, 2014 1:21 am
RELATED TOPICS