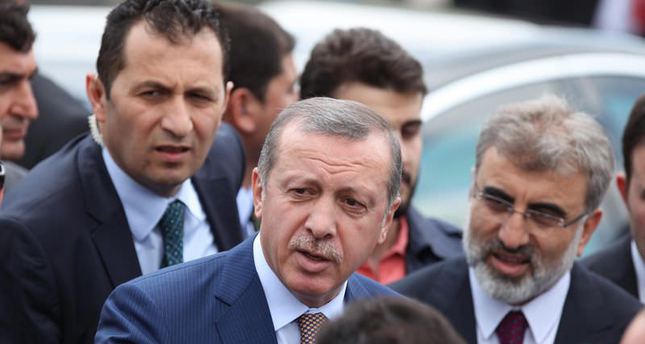 The threat posed by ISIS militants is forcing Turkey to consider contingency plans to set up a buffer zone on the borders with Iraq and Syria, says President Erdoğan

Turkey's military is studying the prospect of establishing a buffer zone along its border with Syria and Iraq amid the escalating threat posed by the Islamic State of Iraq and al-Sham (ISIS), President Recep Tayyip Erdoğan was quoted as saying yesterday. The government will evaluate the plans and decide whether such a move is necessary, Turkish television stations quoted Erdoğan as telling reporters on his plane as he returned from an official visit to Qatar.

A presidency official confirmed that Erdoğan had made such remarks but did not specify where along the border the zone might be established and gave no further details. "The general staff is carrying out inspections on whether a buffer zone could be viable, but there is nothing concrete yet," an official said on the condition of anonymity. Turkey, a NATO member and Washington's key ally in the region, has been reluctant to take part in combat operations against ISIS, or allow the U.S.-led coalition to use its airbases for strikes against the extremists because the group is holding 49 Turkish nationals hostage, including diplomats and children.

Erdoğan said Turkey wanted to solve the hostage crisis through contacts. "Our intelligence units have been working for three months on this," he said, "We will provide every kind of humanitarian support [for the coalition against ISIS]." Turkish intelligence units are working in the field for the safe return of abducted Turkish citizens, Erdoğan said. Erdoğan said some media outlets are trying to harm U.S.-Turkey relations on purpose by publishing "false" news. "Our strategic partnership with the U.S. is continuing.

Some said we will not talk with the U.S. during the NATO summit, but we held an almost two-hour long meeting with President Obama. Later, the U.S. Defense Secretary came to Turkey to hold talks. Last Friday, U.S. Secretary of State was in Turkey. What value would these news pieces have while Turkey and the U.S. hold such meetings? Their aim is to cause trouble between us," Erdoğan was quoted as saying.

Commenting on Turkey's position in the growing U.S.-led anti-ISIS coalition, the Erdoğan said Turkey is not pulling itself out of the coalition but offering humanitarian assistance to the ISIS crisis and urging attacks against ISIS to be careful, implying the safety of Turkish hostages and preventing civilian casualties in neighboring countries. "Nothing other than humanitarian assistance can be expected from Turkey," Erdoğan said.

When asked whether U.S.-led operations would be successful, Erdoğan highlighted that airstrikes without ground attacks would not give any positive outcome and drew attention to Obama's action plan in which he said some groups in the region may be armed to fight against ISIS on the ground.

U.S. Secretary of State John Kerry paid a two-day visit to Ankara for a series of meetings following his Middle East tour as part of the U.S.'s efforts to gain support for the coalition fighting ISIS. "[W]e are important partners, obviously, in NATO, but not just in NATO. We have concerns with respect to what's happening from Libya to Mali to the Horn of Africa and throughout the Middle East, and of course, now the events in Iraq.

So we have a great deal to talk about," Kerry said. "We will be chairing a counterterrorism forum at the U.N. Security Council in a few days," Kerry said. President Obama announced Wednesday that the U.S. will ramp up airstrikes and build an international coalition to degrade and eventually destroy the group.

Many countries have said they support the coalition the U.S. has started to fight ISIS, but most have been vague about any specific role they might play. France has signaled it will carry out airstrikes in Iraq, arm Kurdish forces and send special forces to the country. Britain has said any strikes in Syria would be complicated. It has not ruled out military options, but has not explicitly said whether it will take part in airstrikes in Iraq.

It has delivered aid, given weapons to Kurds and promised training. Germany, which broke a post-war pledge not to take part in conflicts by providing weapons to Kurds, has ruled out airstrikes given its historic anti- war stance since the end of World War II.

Furthermore, Arab countries have so far not publicly said whether they will take part in the coalition militarily. Something the West deems crucial to avoid is intervention that could be seen as a new Western crusade in the Middle East. Arab countries, even those with significant anti-insurgency experience such as Egypt and Jordan, were unlikely to be involved in any ground operation.
Last Update: Sep 17, 2014 9:10 pm
RELATED TOPICS