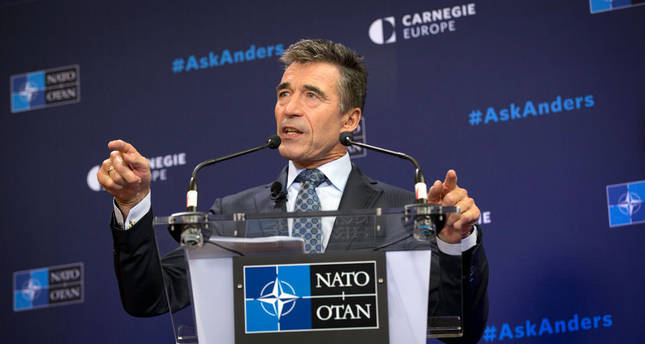 by Daily Sabah Sep 16, 2014 12:00 am
NATO Secretary-General Anders Fogh Rasmussen said that Turkey is an efficient and strong ally in the struggle against the Islamic State of Iraq and al-Sham (ISIS) and has played and is still playing an active role in the alliance.

Rasmussen, a former prime minister of Denmark, speaking at a Brussels gathering of the Carnegie Europe think tank, said during his five-year term as secretary-general of NATO, Turkish officials have always been in perfect cooperation with him, this time regarding the battle against ISIS. Highlighting the strategic significance of the presence of Turkey in the alliance, Rasmussen said, "Every time we needed Turkey, it stepped in to make contributions."

Defining the battle against ISIS as not only a NATO operation, but also a coalition of countries, Rasmussen said the issue has a dimension beyond NATO. He said it is of great significance that the countries in the region participate in the coalition.

Rasmussen also said that ISIS is not a state but a terrorist organization that sparks cultish thinking in the region and exports terrorism.

He added that the alliance finds itself on the front lines of a geopolitical division between "tolerance and fanaticism," and "democracy and totalitarianism." Rasmussen's five-year term as NATO secretary-general comes to a close at the end of the month.

In a question-and-answer session following his speech, Rasmussen underlined the necessity of the use of arms in the battle against ISIS.

Explaining that there were efforts to establish an alliance between Russia and NATO in the past, Rasmussen said, "Russia broke all the rules and agreements that preserved peace since the end of the Cold War."

He added that it has never before been this important to keep NATO strong.

Ten countries formed a coalition against ISIS on the sidelines of the NATO summit in Wales – the U.S., U.K., Germany, France, Italy, Denmark, Poland, Turkey and Canada as well as non-NATO member Australia. However, according to U.S. officials, more than 40 countries have agreed to be a part of the coalition, but those countries and their roles have not yet been disclosed.