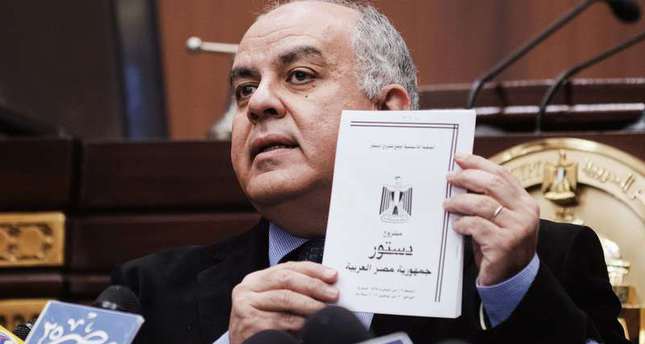 by Daily Sabah Sep 18, 2014 12:00 am
Amr Darrag, who briefly served as Egypt's minister of planning and international cooperation from May 7 to July 4, 2013 and a prominent member of Egypt's Muslim Brotherhood reportedly arrived in Turkey on Tuesday and is planning to seek political asylum in the near future. According to media reports, Darrag's arrival from Qatar was confirmed by Turkish Foreign Ministry officials.

"Some members of the Muslim Brotherhood and its political wing decided to move residence outside the state of Qatar in order to not leave Qatar in a difficult situation," Darrag said in a statement posted on the brotherhood's official Facebook page. Qatar had been seen as a haven for the Muslim Brotherhood after its ouster from Egypt following the overthrow of then President Mohammed Morsi in July 2013.

Qatar's acceptance of brotherhood members has angered its neighbors, Saudi Arabia and the United Arab Emirates as well as Egypt and all three countries have pulled their envoys out of Qatar. President Recep Tayyip Erdoğan said on his return to Ankara from his two-day Qatar visit that those from the brotherhood who have left Qatar are welcome in Turkey.

He said, "In the event that they request to come to Turkey, then necessary investigations will be carried out." Jamal Abdul Sattar, the former deputy head of the Egyptian ministry of religious affairs, in exile in Qatar, said he planned to move to Istanbul: "We [the Muslim Brotherhood] also seek to find a safe location from where we can struggle against the bloody and brutal military coup against us in Egypt and run our activities free of pressure."
Last Update: Sep 18, 2014 9:57 am
RELATED TOPICS