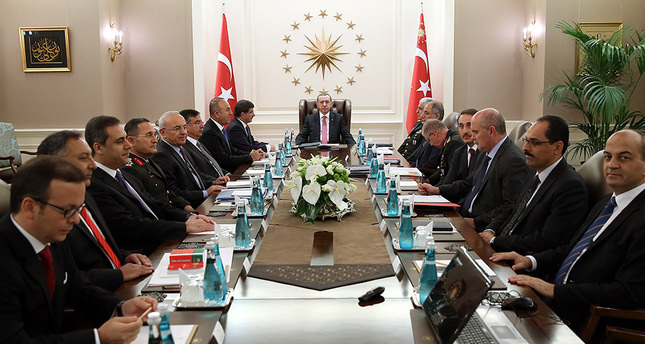 A New York Times report's assertion that Turkey had become a recruitment hub for the ISIS sparks a strong retort from President Erdoğan, who pointed to Turkey's determined fight against terrorism for over 30 years

President Erdoğan said Turkey opposed terrorism and terrorist groups in all its forms but could not approve efforts to equate the violence perpetrated by ISIS with Islam.

Commenting on the ongoing threat posed by the Islamic State of Iraq and al-Sham (ISIS) against and the U.S.- led-coalition that was formed to fight against it, Turkish President Recep Tayyip Erdoğan said that Turkey strictly opposes the concept of "Islamic terrorism."

"Indiscriminately, Turkey is against all kinds of terror and terrorist organizations. We [Turkey] never ever accept the 'Islamic terrorism' concept," Erdoğan said, denouncing those who associate Islam with terrorism. "Islam is derived from peace. Nobody can attribute terrorism to Islam. We will not accept such a thing as Sunni or Shiite terror. We are members of a religion that rejects sectarianism. None of the approaches that make an attempt on someone's life gains acceptance in our eyes."

As world leaders seek for an effective strategy to combat the increasing ISIS threat and violence in Iraq, U.S. President Barack Obama and British Prime Minister David Cameron recently showed that they are in agreement with Erdoğan's statements.

Obama, in his prime-time speech to the nation on the eve of the 13th anniversary of the 9/11 terror attacks, made a particular point of declaring that the actions of ISIS terrorists "are not Islamic."

Giving a speech to the House of Commons over the increasing ISIS threat in European countries, Cameron highlighted that the ideologies of ISIS have nothing to do with Islam by saying, "There is a poisonous ideology of Islamist extremism that is condemned by all faiths and by all faith leaders."
Last Update: Sep 18, 2014 11:39 am
RELATED TOPICS