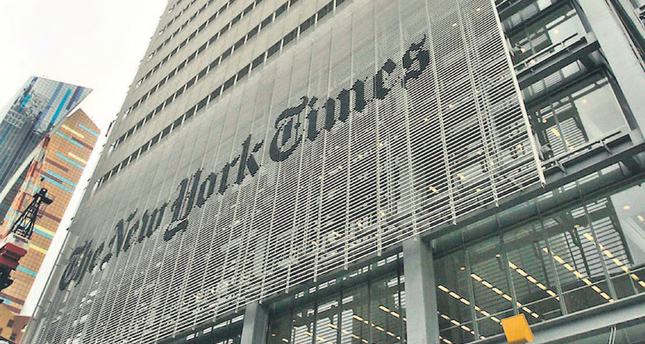 While ISIS continues to hold 49 citizens of NATO member Turkey hostage, foreign media continues to insist on its 'blatant' allegations that Turkey supports ISIS; the NYT drew criticism for its controversial reporting on Turkey

Commenting on The New York Times' recent story claiming that Turkey has turned into a recruitment hub for the Islamic State of Iraq and al-Sham (ISIS) over the last two years, Turkish President Recep Tayyip Erdoğan lambasted the paper and said, "misleading articles by certain newspapers won't affect this country's reputation. We know their intentions very well."

The NYT said that publishing the photo of President Erdoğan and Prime Minister Davutoğlu leaving a mosque in such an article was an error and neither that mosque nor the president's visit were related to the recruiting of ISIS militants described in the article.

When Daily Sabah wanted to talk about the controversial piece and the choice of photograph, the author of the article, Ceylan Yeginsu, refused to talk about the issue, saying that the NYT had advised her to not talk about her piece. Speaking to Daily Sabah, NYT Foreign News Editor Joseph Kahn accepted that the "photo of President Erdoğan that was selected to accompany the story should not have been used in that context."

Kahn first argued that posting the Turkish leaders' photo with a caption that read, "President Recep Tayyip Erdoğan of Turkey, hand raised, and Prime Minister Ahmet Davutoğlu, to his right, in August, leaving the Haci Bayram Veli Mosque in Ankara, the capital, where the Islamic State in Iraq and Syria is known to recruit new members," did not imply that Erdoğan "supported or condoned ISIS." He later, said that he is not defending the photo or the caption and said the NYT has acknowledged that the photo or the caption should not have been included with the story.

Even though it accepted the major mistake, the NYT did not answer the question if it is going to publish an apology for the mistake that is interpreted by many as a "perception operation" that aims to defame Turkey's reputation. The NYT's Kahn added that, "No one at the Times was in any way intending to defame Turkey."

Speaking about the Gülen Movement owned English daily, Today's Zaman, using another photograph of Erdoğan and Davutoğlu at Hacı Bayram Mosque for an article titled "Some 1,000 Turks joined ISIS,"

President Erdoğan said, the Gülen Movement - which is accused of attempting to topple elected government through its followers in the judiciary and police department - and its foreign collaborators are targeting Turkey's "unity, peace and strong economy."

Earlier on Wednesday, President Erdoğan strongly dismissed The New York Times' misguiding allegations, saying that the attempts to depict Turkey as a supporter of ISIS were a cowardly act as Turkey does not and would never buy oil from the terror group.

Erdoğan also made it clear that ISIS militants do not and have never received aid from Turkey. "We have never accepted 'terrorism' and we will never accept such a concept," he said and stressed that the religion of Islam by its nature is derived from peace and it is shameful to ascribe such violent connotations to a religion that calls for peace and love and condemns the killing of innocent people regardless of their religion.

Furthermore, Turkish Foreign Minister Mevlüt Çavuşoğlu stated that reports, which alleged that Turkey has ties with ISIS, are nothing more than fabricated news.

Appearing as a guest on a TV show last Wednesday, Çavuşoğlu made striking remarks regarding the latest developments in the Middle East. About reports published in The New York Times and The Wall Street Journal and former U.S. Ambassador Francis Ricciardone's remarks, Çavuşoğlu said there is an intentional perception management being carried out by those who also prepared the Dec. 17 coup attempt in cooperation with Gülenist infiltration. "Publishing an article on our president and prime minister leaving Hacı Bayram Mosque after Friday prayer with a claim that 'ISIS Militants are recruited here' is ridiculous and complete falsehood. As a symbol of brotherhood and peace, no terror comes out of Hacı Bayram-ı Veli Mosque, but peace," he stated.

Stating that Turkey's Foreign Ministry refused a meeting request with the Editor-in-Chief of The New York Times, Çavuşoğlu said, "There is nothing to talk about with those who make baseless news reports. It is nonsense to meet with those who run perception managements intentionally. They want to depict Turkey as a country that supports terrorism."

Turkey's foreign minister said that although Turkey warned its allies about the rising danger of ISIS four years ago, these warnings were not taken note of. He said: "We also said that the Maliki regime in Iraq would not bring peace and harmony but instability in the region. At that time, those who defended Maliki and Assad, including the U.S., understood that we need to fight against them [extremist groups]. Again we are telling those countries how to cope with these groups in detail."

The foreign minister also harshly criticized the Gülen-affiliated daily, saying "Once, fictitious and slanderous reports are made abroad they make the headlines of Turkish newspapers. But those people [Today's Zaman reporters] seem to have developed such cooperation now that they have reversed the previous situation. They want to tear down Turkey's image, they are backstabbing Turkey." He also evaluated the situation of 49 Turkish diplomats being held hostage at the Turkish Consulate in Mosul and promised to bring them back to the country safe and sound. "We always fight against terrorist organizations; now we do so more than usual. We do not make any promises that we cannot fulfil. Our policies are clear, transparent, peaceful and humanitarian at all times."
Last Update: Sep 19, 2014 1:21 pm
RELATED TOPICS