UN should get involved in buffer-zone plan: Atalay 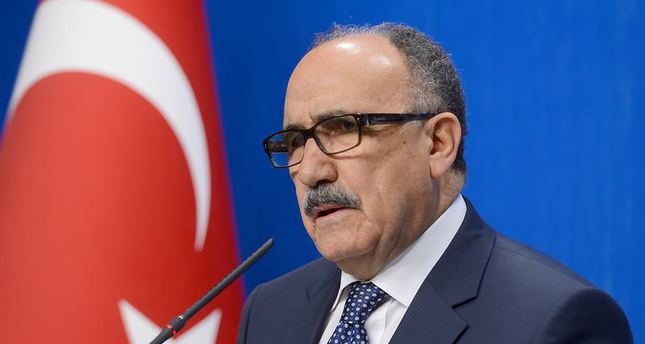 by Daily Sabah Sep 19, 2014 12:00 am
"Imposing a buffer-zone at Turkish borders is a solution which can work but is not possible with only Turkey's efforts, Turkey to impose a buffer-zone by itself is too risky. The UN should get involved in the act," Ruling AK Party Deputy Chairman and Spokesman Beşir Atalay said on Friday.

Atalay reminded people that Turkey offered the United Nations to impose a buffer-zone in the region several times, but the demand was ignored. "If UN had accepted the offers from before, Turkey could have built the refugee camps in the zone."

Atalay also commented on the 4,000 Syrian Kurds who fled to Turkey from the ISIS threat saying that they will be settled and their needs will be met as soon as possible.

Syrians had been amassing for the last two days at the border district of Tal Abyad in Raqqa city as they waited for permission to cross.

Syrians had crossed the Turkish border on Friday with the assistance of the Turkish military and they will be transferred to an empty school building in the village of Oylum.

Meanwhile, the fighting lingers in the Ayn al-Arab area of Raqqa between militants led by ISIS and Kurdish PYD forces.