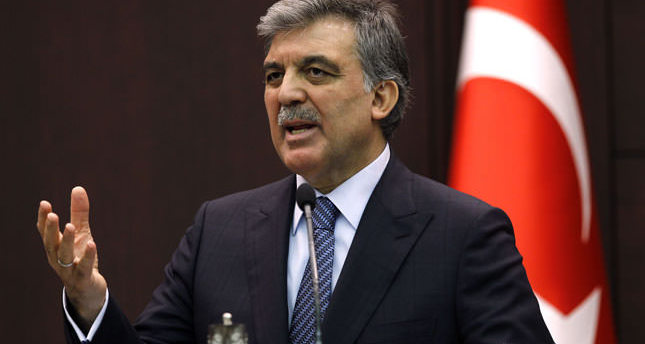 by Daily Sabah Sep 20, 2014 12:00 am
Former President Abdullah Gül has denied rumors that he will be forming a new party to continue his political career. Speaking to the press during his visit to Kayseri Metropolitan Municipality on Friday, Turkey's 11th president stated that he wants to make it clear that the rumors he will form a new party are not true. "As I said before, I will be doing what other former presidents have been doing after they serve as the president. I will be helping my friends to become more successful," said the former president.

Gül was one of the founders of the ruling Justice and Development (AK Party) together with current President Recep Tayyip Erdoğan, who became the country's 12th president for a five-year term in August's first-ever direct poll to pick the head of the Turkish state.

Erdoğan previously said it is only "natural" that Gül would come back to "his party," as Gül too said during his farewell reception at the Çankaya Presidential Palace in capital Ankara. Gül also assumed high-level posts in Justice and Development (AK) Party governments, including prime minister and foreign minister. As a loyal deputy to Prime Minister Erdoğan, he served briefly as prime minister when the AK Party swept to power in the November 2002 general elections.

Erdoğan was barred from standing in that election because of a previous jail conviction for reading a poem. Erdoğan became premier in March 2003. Gül presided over the historic launch of European Union membership talks after becoming foreign minister in 2003 and is widely respected in Europe as a committed reformer. He was elected president by Parliament in August 2007. After he became president, Gül and the government under Erdoğan re-launched a push to help solve regional conflicts ranging from Iran to Israel-

Syria peace talks. Gül became the first Turkish leader ever to set foot in neighboring Armenia in 2008, when at the invitation of his Armenian counterpart, he flew to Yerevan to watch his national side play Armenia in a World Cup qualifying match.
Last Update: Sep 20, 2014 1:31 am
RELATED TOPICS