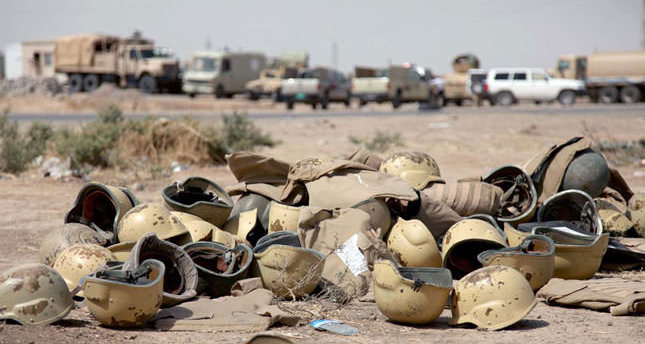 by Sep 20, 2014 12:00 am
Turkey's foreign minister on Thursday called for a greater exchange of information with other states to prevent extremists entering his country and travelling on to Iraq or Syria to join Islamic State of Iraq and al-Sham (ISIS) militants.

Thousands of foreign fighters from countries including Turkey, Britain, parts of Europe and the United States are believed to have joined the Islamist militants, many of them travelling over the Turkish border. "Turkey cannot fight this matter on its own. First and foremost, it needs information and intelligence sharing with our allies, like Germany, Europe and the United States,"

Mevlüt Çavuşoğlu said at a press conference with his German counterpart in Berlin. "It is most ideal if these people are identified before leaving their countries in order to prevent their entry into Turkey or to deport them once they've entered," he added.

German security authorities estimate about 3,000 western European citizens have joined the ISIS, 400 of them Germans - many simply by boarding cheap flights to Istanbul then arranging passage across Turkey's long borders with Syria or Iraq. Turkey, a NATO member, has made it clear it is reluctant to play any frontline role in U.S. President Barack Obama's plans to bomb ISIS fighters in Syria and Iraq, for the concerns related to the fate of Turkish hostages held by the group.

German Foreign Minister Frank-Walter Steinmeier said he and Çavuşoğlu had discussed the alarming numbers of young people involved. "We have an interest in preventing as many of them as possible from reaching the conflict," he said. German intelligence officials believe five Germans citizens carried out suicide attacks for the insurgents in recent months. "We are sad to hear the unfair (allegations) against us... we are very determined," said Çavuşoğlu in reply to accusations that Turkey is not doing enough to secure its borders. "We know that every terrorist that comes to this region, whether they are foreign fighters or fighters from this region, are threats to Turkey." "We have caught thousands of suspects whom we have deported ... We have placed 6,000 people, 3,000 people just in the last seven months, on a no-entry list. Hopefully we will continue to cooperate like this," he added.

Turkey had increased security measures at bus and train stations, he said, and had intensified border controls at crossings with Syria and Iraq, whilst maintaining its open door policy for refugees from those countries.