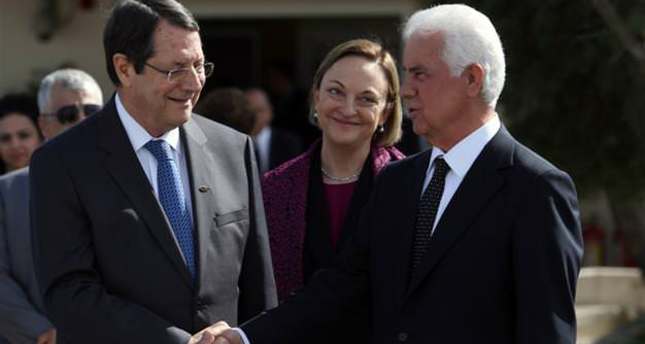 by Daily Sabah with Agencies Sep 20, 2014 12:00 am
The EU Commission should not impose "unjustified requests" on Turkey regarding the Cyprus issue in the upcoming progress report, Turkish Cypriot Foreign Minister Özdil Nami said following his meeting with European Commissioner for Enlargement and European Neighborhood Policy, Stefan Fule, late Thursday in Brussels.

Speaking to Anadolu Agency (AA), Nami stated that Turkey was not evaluated justly and fairly in the previous EU progress reports on Turkey's efforts to meet EU standards. "For example, Turkey is asked to normalize its relations with the illegally-founded Southern Cypriot Republic. The essence of the problem is this already. Such demands are equal to pretending that there is no problem at all," Nami added.

The stalled talks were resuscitated in February with a joint declaration outlining the details of a federal state reunifying the island. The solution is expected to address issues such as a constitutional framework, territorial adjustments, the return of property or compensation payments and the return of displaced people. Cyprus has been divided into an internationally unrecognized Turkish north and an internationally recognized Greek south since 1974. Talks between Turkish and Greek Cypriot leaders and efforts to reunite the island have failed so far.

A fresh round of negotiations to solve the Cyprus issue will be held between Turkish and Greek Cypriot leaders and inter-delegation negotiations will continue throughout the week. In the past weeks, Turkish President Recep Tayyip Erdoğan and Prime Minister Ahmet Davutoğlu paid official visits to Northern Cyprus with the aim to show solidarity with Turkish Cypriots and to give peace messages to both sides. Following those visits, the President of Northern Cyprus Derviş Eroğlu announced that both Turkish and Greek Cypriots have agreed to further talks for a permanent peace on the divided island.

Eroğlu told reporters on Wednesday that he had agreed with Greek Cypriot President Nicos Anastasiades to move on to the "give and take" phase of negotiations. His remarks followed U.N.-hosted talks in Nicosia that marked the end of preparatory discussions. "Accordingly, we agreed to move the process forward to constructive and result- orientated talks," Eroğlu said. He emphasized that a settlement for Cyprus is only possible via mutual compromise, and said the two sides could find common ground in the end. "What is important is to reach an agreement where we can see Turkish Cypriots living on this soil in peace and tranquility,"

Eroğlu added. U.N. Special Adviser to Cyprus Espen Barth Eide said both sides had pledged to continue peace talks. "The leaders agreed to work toward coming to an agreement soon and then holding simultaneous referendums on both sides of the island," said Eide. On Tuesday, Davutoğlu had called on Greek Prime Minister Antonis Samaras and Cypriot President Anastasiades to work together to set a peacemaking example in Cyprus at a press conference held in Northern Cyprus. "The Cyprus issue has continued for more than 50 years. We [Turkey] have stood by [Northern] Cyprus until now and we will continue to do so.

What we want is to ensure peace on the island and show how peace dominates the southern Mediterranean. We held many talks with Nicos Anastasiades to expedite [the process]." Highlighting that delays in the negotiations leads to a loss of time, Davutoğlu urged both sides to come to the table for talks over reunifying the island. "I call out to [Greek Cyprus leaders]: Let's go to Southern [Cyprus] and drink a cup of tea and return to Northern [Cyprus] together and be in peace again," Davutoğlu said to highlight the significance of peace on the island.
Last Update: Sep 20, 2014 1:36 am
RELATED TOPICS