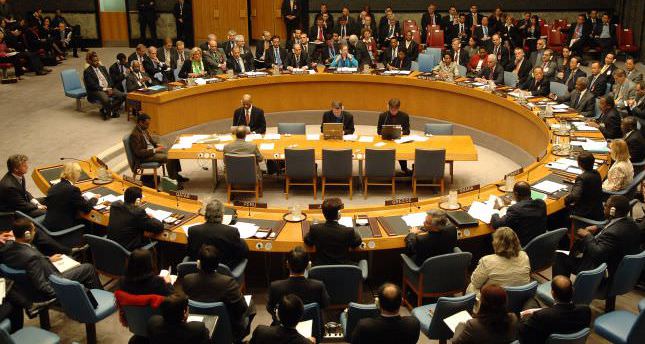 by Daily Sabah Sep 20, 2014 12:00 am
Turkey's priority for the upcoming U.N. General Assembly to be held in New York next week is expected to be its candidacy for a non-permanent membership in the U.N. Security Council for the 2015-2016 term, ahead of elections to the UNSC in October. The 69th Regular Session of the U.N.
General Assembly is scheduled to convene at the body's New York headquarters on Tuesday under the theme "Delivering on and implementing a Transformative Post-2015 Development Agenda."

As New York prepares to host nearly 140 senior officials from a variety of nations, the world will witness an intensive week with world leaders discussing the latest developments, including the increasing Islamic State of Iraq and al-Sham (ISIS) threat in the Middle East, climate change, Iran's nuclear program, the Ukrainian issue and the Ebola virus that has claimed hundreds of lives.

Continuing its preparation at full steam, Turkey's U.N. Permanent Representative Halit Çevik stated that numerous bilateral talks are on Turkey's agenda to increase the support in the country's candidacy process.

Reiterating that the election for UNSC non-permanent membership is due in Oct. 16, Çevik said, "We [Turkey] believe that Turkey's UNSC membership will contribute to peace and security especially in this period that our region is witnessing important developments.

This belief led us to announce our candidacy once again right after our membership ended." The representative noted that Turkey created a positive and transparent profile during its previous membership periods and promoted the dialogue in resolution of the issues. "Considering the crisis surrounding our region, we believe that UNSC is in need of this kind of contribution once again," added Çevik. Emphasizing that Turkey is a defender of the U.N.'s core principles as a founding member of the U.N., Çevik said, "Our country [Turkey] plays an active role in a wide range of issues, including development, combatting terrorism, gender equality, combatting organized crimes."

Çevik pointed out that Turkey's developing economy took the country to the forefront within the U.N. and added, "Today, our country [Turkey] morphed into a country that is called on for its humanitarian aid campaigns and development activities in different parts of the world. In 2013, our country will be the third biggest donor country in humanitarian aid area at governmental level."

The General Assembly will be a session where the post-2015 Development Agenda is to be finalized through negotiation among governments. Turkey has been actively taking part in the post-2015 development agenda due to its work for international peace and security. zTurkey will attend the Assembly under the leadership of Turkish President Recep Tayyip Erdoğan. The meeting will be Erdoğan's first address to the U.N. as president.

The president will address the Assembly at a morning session on the opening day, September 24. He is also expected to hold bilateral meetings with other leaders.

The first plenary meeting of the Assembly will be opened by Ugandan Foreign Minister Sam Kutesa, who was elected president of the General Assembly on June 11. The General Debate's opening was postponed by a day to next Wednesday in order to accommodate the Climate Summit as well as to make room for a World Conference on Indigenous Peoples and a special session on population and development.The U.N. Secretary-General Ban Ki-moon will host the climate change summit on Tuesday, Sept. 23 with the aim of reaching a "high-level political commitment" on climate change. Erdoğan has also been invited to run for the co-chairmanship of the session and to deliver a keynote at the session.
Last Update: Sep 21, 2014 2:28 pm
RELATED TOPICS