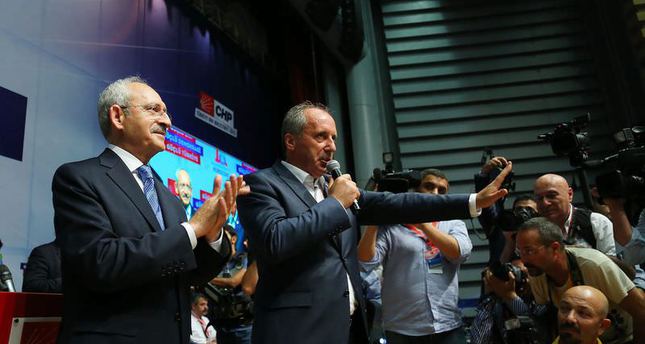 by Daily Sabah Sep 21, 2014 12:00 am
The Turkish government's main opposition Republican People's Party (CHP) has shown more fractures with Vice Chairman and Ankara Deputy Emrehan Halıcı's resignation from his post in the party over the weekend. According to sources close to the CHP, the reason behind Halıcı's resignation is that his name was not included in the party assembly list after the party's extraordinary congress on Sept. 5-6.

Before the Aug. 10 presidential election Halıcı had pledged that a system would be established to infallibly provide a vote flow to the headquarters. However, since his did not predict the 18 percent deficit suffered by the CHP in the election, Chairman Kemal Kılıçdaroğlu did not add him to the party assembly list, sources close to the party said. As such, Halıcı resigned from his post because he was not allowed a place on the Central Executive Committee of the party. With Halıcı's resignation the number of CHP deputies in the Turkish Parliament has dropped to 129.

Kılıçdaroğlu's attitude toward party delegates has also been harshly criticized by Muharrem İnce, the former group deputy chairman and Yalova deputy of the CHP. He said, "There is a structure which is full of people insulting voters, for they are giving their votes in exchange for pasta and coal. This is the same logic in which the delegates are also insulted. It is impossible to come to power with this mentality."

In the last congress, Muharrem İnce ran for the chairmanship and achieved 415 votes against the current party leader Kılıçdaroğlu. İnce's candidacy and support sent a clear signal that Kılıçdaroğlu's leadership in the party is on shaky ground. Soon after the party's failure in the presidential election, 50 current and former deputies from the CHP called on Kılıçdaroğlu to resign from his post.