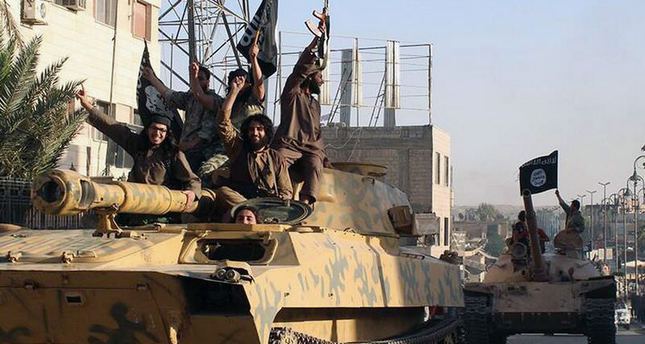 by Mehmet Solmaz Sep 21, 2014 12:00 am
With the return of the hostages held by the Islamic State of Iraq and al-Sham (ISIS), Western media started discussing whether or not Turkey will take part in military action by the U.S.-led and growing anti-ISIS coalition.

NATO member Turkey, which saved the lives of its abducted citizens through its diplomatic tactics using negotiations with local tribes in neighboring Syria and Iraq, had previously reiterated that it will not get into an armed response to ISIS but will provide support to the anti-ISIS coalition including intelligence, humanitarian and security assistance. Circles close to the government and political experts state that the stance of Turkey will not change as the hostage crisis was not the only point that prevented it from joining a military action.

According to foreign policy experts, involvement in any armed coalition against ISIS could lead to an influx of extremist militants into the country which could harm its relations with non-ISIS people of neighboring countries. Such people could get killed in armed attacks and would harm the overall trust it gained from the people of Middle East by taking a position next to Western powers.

Turkey, a NATO member and Washington's key ally in the region, had been reluctant to take part in combat operations against ISIS, or allow a U.S.-led coalition to use its airbases for strikes against the militant group, citing concern over for the safety of its hostages and its historical ties with the region. Speaking to press on Sunday, President Recep Tayyip Erdoğan signaled that Turkey may reconsider its position now that the hostages have been released. "We [previously] said we cannot play a role in the coalition, but we will map out a roadmap after intensive negotiations with coalition members," he said.

Turkey should not change its "ethical" attitude in the anti-ISIS coalition and should continue its humanitarian diplomacy in the region, author and political analyst Vahdettin İnce told Daily Sabah on Sunday. İnce added that Turkey knows the region well and unlike Western powers, it knows that an armed response will always brought chaos to the region. "Turkey's success in general comes from using its 'soft diplomacy power' and if it changes this attitude for ISIS, this can lead to the import of terrorism. In a possible attack by Turkey, it would lose the trust of people in the region. We should not forget that, it was from the tribes that Turkey sought assistance to rescue its hostages from the hands of ISIS," İnce added.

Renowned journalist and former politician Orhan Miroğlu told Daily Sabah that attempts to pull Turkey into problematic situations since the Gulf War has been continuous and in each case Turkey acknowledged the demographic and social side of the crises that were taking place in its neighboring countries. The Iran-Iraq war, the Iraq invasion, Iraqi Kurds gaining autonomy and the civil war in Syria are all major developments during this period, Miroğlu said, adding that three years ago some powers tried to pull Turkey into a war with the Assad regime and committed all sorts of provocations including the downing of a Turkish jet and suicide bombings in towns bordering Syria.

"Turkey did not fall into the trap and we told the world that 'We won't let others draw our foreign policy roadmap.' Turkey has opened its doors to people fleeing violence in their countries, a number which now exceeds 1.5 million. If it had not allowed these people to enter, at least half of them would have been killed in Syria. The situation in Iraq is no different. There are around 700,000 Yazidis in northern Iraq, some of whom sought refuge in Turkey after fleeing ISIS violence," Miroğlu said.

Miroğlu stated that with its compassionate diplomacy, Turkey - which is the third international donor in humanitarian assistance and home to nearly two million refugees - is on the right path and added that President Recep Tayyip Erdoğan should be given a Nobel Peace Prize for his diplomacy. "Obama was given the prize for the possibility of aiding world peace, but in this case we're not talking about possibilities but facts," he added.