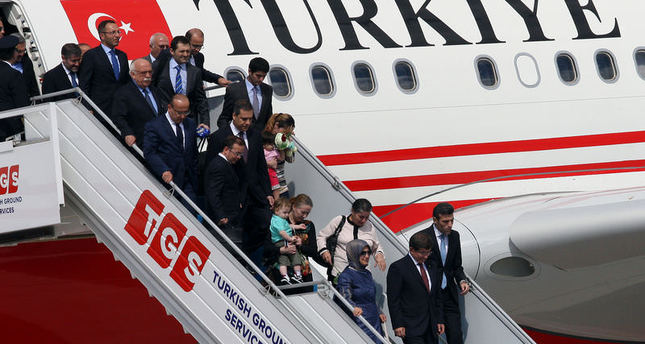 by Daily Sabah with Agencies Sep 21, 2014 12:00 am
The U.S. welcomed on Saturday the release of 46 Turkish hostages and three Iraqi consulate personnel held by the Islamic State of Iraq and al-Sham (ISIS) in Iraq since June. "We welcome their release and are pleased they will soon be reunited with their families," National Security Council spokeswoman Caitlin Hayden said in a statement sent to Ankara-based Anadolu Agency (AA).

Also, the EU on Saturday expressed gladness over the release of 46 Turkish hostages taken by ISIS militants in Iraq.

A statement issued by the European External Action Service said it was pleased to learn that the 46 Turkish hostages taken by ISIS inside the premises of the Turkish consulate have been released and are able to be reunited with their families.

The international coalition is "committed to ridding the region of the scourge" of ISIS, said the statement, noting that Turkey is a "vital partner in this endeavor and an essential focus for our dialogue."

Also, German Foreign Minister Frank-Walter Steinmeier welcomed the rescue of the Turkish hostages in Mosul. Speaking on Saturday, he said: "For three long months they were held by terrorists and were permanently afraid for their lives."