Deputy PM: Turkey is ready for the worst in refugee issue 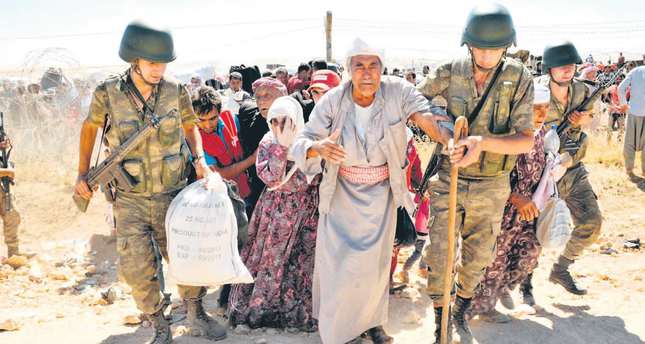 The flow of Kurdish refugees into Turkey continues from Kobani, a Syrian town where Islamic State of Iraq and al-Sham (ISIS) advancements have threatened the local community.

According to Turkish authorities, the number of Kurdish refugees has reached 130,000 since the opening of the border on Friday, Sept. 19. Regarding the latest developments, Deputy Prime Minister Numan Kurtulmuş said yesterday that Turkey is ready for even the worst scenario: "Encountering a wave of hundreds of thousands of refugees would be the worst-case scenario. We have made all the neccesary preparations, which include logistical support, the aid to be supplied by Turkey's Disaster Agency (AFAD). We hope we are not faced with a greater flow of refugees even though all the details are prepared. This is not a natural disaster." Turkey already hosts around 1.5 million Syrians who have fled the
three-year-old civil war in the country.

NATO member Turkey, which according to President Recep Tayyip Erdoğan, saved the lives of its abducted citizens through diplomatic tactics using negotiations with local tribes in neighboring Syria and Iraq, had previously reiterated that it will not get into an armed conflict with ISIS but will provide support to the anti-ISIS coalition including intelligence, humanitarian and security assistance. Turkey, which is sheltering over 1.5 million Syrian refugees, was the third highest international donor of humanitarian assistance after the U.S. and U.K. in 2013, accounting for 7.3 percent of the total humanitarian assistance, according to a 2014 Global Humanitarian Assistance (GHA) Report.

Kurtulmuş also underscored the urgency of unity and solidarity about the issue of refugees: "Nobody should try taking advantage of our Kurdish brothers based on their political interests. We accept all incoming Turkmens, Arabs, Yazidis and Kurds without discrimination. Everyone, all political parties, should back this issue."

AFAD released a statement on Monday about the current situation of coordinating the hosting of Kurdish refugees who are fleeing Kobani. Indicating that fieldwork still needs to be conducted, the statement also said that refugees are having medical and security screening and have received emergency food and water supplies from the registration center constructed by the institution: "Those who are registered at this center are reunited with their relatives if found in Turkey; otherwise, they are transferred to temporary sheltering centers constructed by AFAD." "The total population of [Kobani] is over 400,000. We think they have been dispersed to other areas within Syria," said the minister. Kurtulmuş said he hopes for an immediate end to the attacks and for the return of the displaced people, which he says is only possible if the political conditions in Syria improve.

Turkey opened the frontier Friday to cope with a rush of Kurdish civilians fearing an attack on the Syrian border town of Kobani in Raqqa province.
Syrian civilians seeking shelter from ISIS assaults on their villages are being registered at a coordination center set up by Turkey's AFAD upon entry to Turkey.

The recent flow of refugees is arriving in the Turkish province of Şanlıurfa after recent ISIS attacks and the siege of the northern Syrian town of Kobani and its surrounding villages. Şanlıurfa already hosts nearly 200,000 internally displaced people mainly from Syria's Kurdish minority.

Meanwhile, Turkish authorities on Monday denied allegations by the BBC of closing some of Turkey's border crossings. Reporters in the region have said that the border crossings are closed temporarily.

Turkey has been home to over 1.3 million Syrian refuges since the beginning of Syrian civil war, which has been ongoing for more than three years, although the unrecorded figure could be close to 2 million. Turkish President Recep Tayyip Erdoğan said on Sunday that Turkey is showing its hospitality to those who shelter in Turkey regardless of their ethnicity. "Arabs and Kurds and Yazidis are all coming. We cherish and welcome all of them," he said.
Last Update: Sep 23, 2014 12:19 pm
RELATED TOPICS